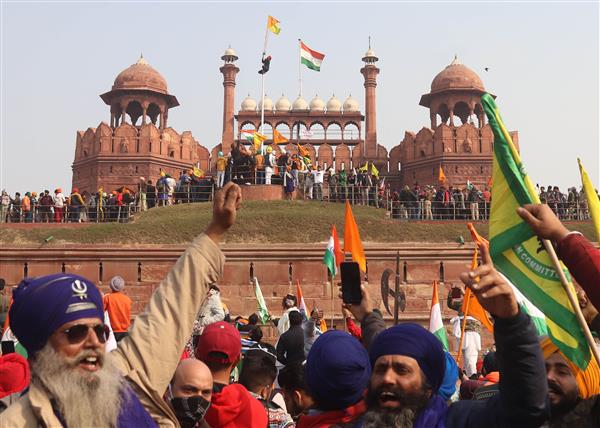 Many of the protesters, driving tractors, reached the Red Fort and entered the monument on Republic Day. Tribune file

In a bizarre case, the crime branch of Delhi Police has summoned a farmer, who died on December 31, to join an investigation for the January 26 violence.

As a matter of fact, the three brothers named in the notice were never associated with the farmers' protest, says the family.

Bhupinder Singh, son of Surjit Singh (88) said, his father and brothers, Jagir Singh and Gurcharan Singh, were never a part of the farmer's protest.

Women protesters on their way to Gurdwara Rakabganj refuse to remove ‘flags’, detained
A two-year-old was also held

"Jagir Singh, who had died at the age of 90 on December 31, was bedridden for last one year due to old age. He was a farmer and landowner all his life, but never participated in the protest."

Singh said his father Surjit Singh, and his younger brother Gurcharan Singh also did not participate in the protest over the three farm Bills.

"My father is 86 years old and suffers from age-related issues. He lives at our village, Neholka of Kurali. His brother Gurcharan Singh, who is a retired government teacher, lives in the city and is no longer associated with farming now,” he said adding, "We received the notice on February 24 and were shocked as we did not know how to deal with the matter. We contacted the legal team of Samyukt Kissan Morcha. They have assured us all possible help."

He said they also want the Punjab government to help them and other people facing such notices.

Buta Singh Burjgill, state president, Bhartiya Kisan Union (Ekta), said the Delhi Police have sent such notices to many other people who have died much before January 26.

"They are creating a fear and are also sending notices to people on the basis of registration numbers of vehicles that came for langar sewa or other services in the protest. We have told people not to go to the crime branch directly but contact our legal team instead."

Opinion: How the police let down Delhi riot victims