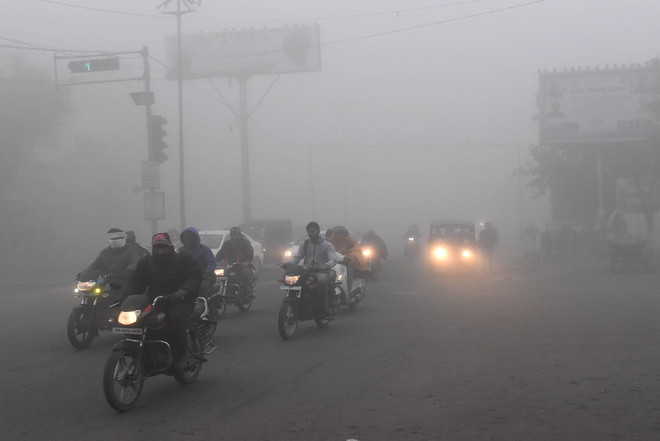 Traffic moves at a snail’s pace amid dense fog in Bathinda on Wednesday. photo: Pawan Sharma

Cold wave and dense fog threw life out of gear in Bathinda city. A thick blanket of fog enveloped the city on Wednesday morning, causing minor accidents on the roads due to poor visibility.

As main and link roads were covered under thick fog, vehicles could be seen plying at minimum speed.

The fog restricted penetration of sun rays in the morning and cold wind added to the chill. However, by the noon, little sunshine could be seen. Morning walkers were worst-affected. However, this weather will be beneficial for the wheat crop.

As per the Meteorological Department of the Punjab Agricultural University (PAU) regional centre, Bathinda, the minimum temperature witnessed in the city was 3°C and the maximum was 13.6°C.

Gurmeet Singh, a resident of Model Town, Phase 3, said, “I had assumed that the fog will not be thick, but when I stepped out of the door, I realised its enormity. I faced difficulty while walking.”

Another resident, Ankush Aggarwal, said “As per my routine, I woke up at 7 am. I could see the dense fog from my balcony. Visibility was less, so I had to cancel my morning walk. I preferred to stay indoors.”