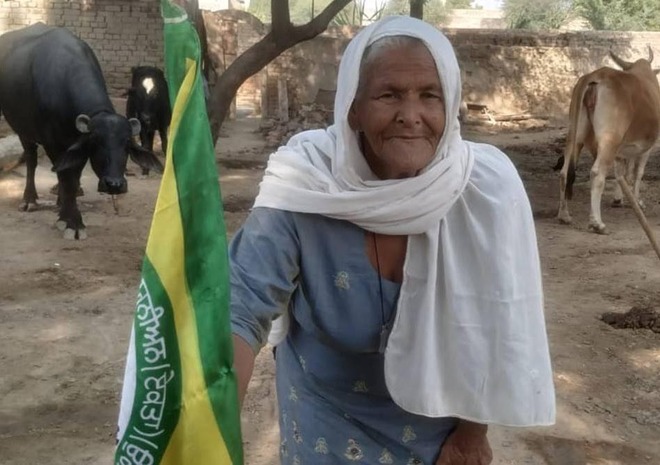 Mohinder Kaur, a resident of Bahadurgarh Jandian village, on Wednesday, lashed out at actor Kangana Ranaut for commenting on her without even knowing her.

In conversation with The Tribune, the 73-year-old says: “Kangana kaun hai, kyu mainu badnaam kar rahi hai, main ta kheti-badi kardi haan, main aap khet wich fasal katdi haan (who is Kangana, why is she defaming me… I do farming and harvest crops on my own).

“We have 12 acres of land. After my husband (Labh Singh) was diagnosed with asthma, my son, his wife and children and I take care of the fields. I still visit the fields and do the farming. What Kangana has said is undignified,” she says.

Mohinder Kaur’s husband Labh Singh says: “We are upset over the remarks made by Kangana. We are not labourers. We eat food by doing hard work, who can give us Rs 100 for joining the protest.” Kangana should take her words back, he adds.

In a lighter vein, the woman farmer says she gives Rs 500-600 per quintal to a labourer for picking cotton in her fields, while Kangana can give her Rs 700-800.

Mohinder Kaur stresses she is part of Delhi protest as she is a farmer herself, adding she had also participated in the dharnas at petrol pumps and Dabwali interstate border.

Jagdev Kaur, her neighbourer, says: “Whatever Kangana said is unacceptable. We will give her Rs 1,000; she should come and sit with us in the protest”.

Swaranjit Kaur, another neighbourer of Mohinder Kaur, lashed out at the actor for belittling the farmers’ protest. Sharing a photo of the woman in the farmer’s protest, Kangana had tweeted: “Ha Ha she is the same Dadi who had featured in Time Magazine for being the most powerful woman. And she is available for 100 rupees.” The actor later deleted the tweet after it invited the backlash.

Zirakpur-based advocate Hakam Singh has sent a legal notice to actor Kangana Ranaut for hurting the sentiments, image and repute of an elderly woman, Mohinder Kaur (pic), protesting in Delhi and hurting the sentiments of farmers with her photo recently. He has sought an apology from the actor on social media within a week.