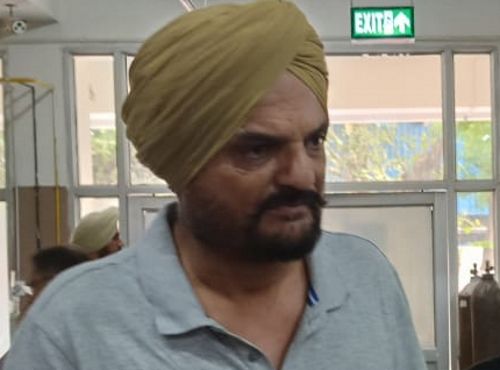 Family sources say Moosewala's father Balkour Singh has received a threatening message on social media from a Pakistan number. The police are probing the matter.

Around two months have passed since Punjabi singer Sidhu Moosewala was shot dead by gangsters, but fans from every nook and corner continue to visit his parents to offer condolences and pay their respects at Musa village in Mansa district.

Meanwhile, a photo was uploaded in the story section of Sidhu Moosewala’s official Instagram page on Tuesday. An appeal has been made through this photo to people, who want to meet Moosewala’s parents to mourn his death at their house. A message in this photo states, “Sidhu Moosewala’s parents have gone out of village for a few months. Whosoever is coming to meet them is requested not to get disappointed. We will keep you updated through the post.”

Sidhu Moosewala’s family sources told The Tribune, “Moosewala’s father Balkour Singh has received a threat message on social media platform from a Pakistan number. The police are probing the matter.”

Residents of the slain singer’s village and many of his fans are feeling partially relieved after the encounter of two sharpshooters Jagroop Rupa and Mannu Kussa. Fans said the Punjab Police showed bravery by killing the two culprits.

Moosewala’s parents said all those, who brutally killed their talented son, should also meet the same fate. Only then they would get justice, they said.

As the news about the encounter of Moosewala’s killers went viral, a large number of villagers and fans went to the fields, where the singer was cremated and offered prayers to his statue installed on the spot. They said as long as all killers of Moosewala did not get severe punishment like hanging, his family and fans would not get justice.

Family sources say Moosewala’s father Balkour Singh has received a threatening message on social media from a Pakistan number. The police are probing the matter.