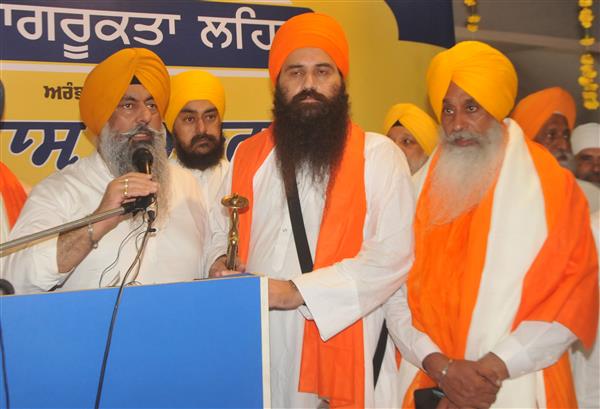 In a move that may escalate tension between the Delhi Sikh Gurdwara Management Committee (DSGMC) and the Shiromani Gurdwara Parbandhak Committee (SGPC), the former today launched a “parallel” campaign “Dharam Jagrukta Lehar”, which is identical to the latter’s “Dharam Parchar Lehar” to propagate Sikh principles in the state.

Amid changing political equations in the state, anti-Badal groups have come forward to support the DSGMC’s move. Sukhdev Singh Dhindsa-led SAD (Sanyukt) activist Manjit Singh Bhoma has been appointed by the DSGMC to lead the campaign.

The SGPC manages affairs of historic gurdwaras in Punjab, Haryana, Himachal Pradesh and Chandigarh while the ones in Delhi were being managed by the DSGMC led by Harmeet Singh Kalka, who also heads a splinter Akali group SAD (Delhi state).

If the Delhi Sikh body has come to Punjab to initiate this exercise just out of jealousy or any kind of retaliation, then its highly condemnable. If it (DSGMC) is really serious about the cause, then this campaign is required more in Delhi. — Harjinder Singh Dhami, president, SGPC

Though Kalka denied any tussle with the SGPC, yet he mentioned about the SGPC’s “undue” interference in New Delhi by launching religious campaigns and providing free bus service for “sangat” to visit shrines in Punjab.

Kalka said more than New Delhi, the SGPC should concentrate on Punjab to counter “conversions”. “This prompted us to take a call. Many instances have come to the fore where Sikh families embraced another religion and the SGPC remained a mute spectator,” said Kalka.

When asked if the DSGMC’s “Dharam Jagrukta Lehar” would lead to a tussle with the SGPC, he said, “Our doors are open for the SGPC. The politicisation of the SGPC’s affairs by a particular family had deviated the ‘supreme Sikh body’ from its principles.”

Haryana Sikh Gurdwara Parbandhak Committee (HSGPC) chief Baljit Singh Daduwal opined that neither the SAD nor the SGPC could be blamed, but the leaders who govern the Sikh bodies were responsible for dismal state of affairs.

Damdami Taksal head Harnam Singh Khalsa, who had participated in the DSGMC’s event held at Talkatora stadium in New Delhi on July 17, was conspicuous by his absence.