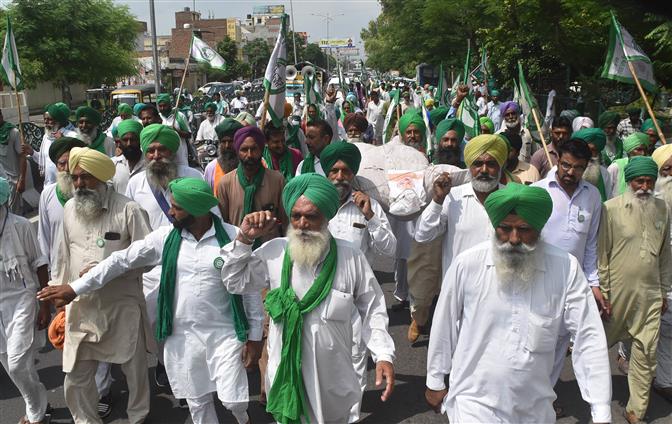 Farm activists protest against the Centre in Bathinda. Tribune photo

Scores of farmers under the banner of the Bharti Kisan Union (Ekta Sidhupur), today staged a protest outside the District Administrative Complex against the Centre, for bringing the Electricity Amendment Bill 2022.

Baldev Singh Sandoha, general secretary, Bharti Kisan Union (Ekta Sidhupur), said, “It is a strategy to favour the corporates by bringing the Electricity Amendment Bill 2022 in the Lok Sabha. The Centre is trying to privatise power sector.”

Resham Yatri, another union leader, said, “The Centre had given us a word that without consulting the Samyukt Kisan Morcha, it won’t bring the Electricity Amendment Bill. Now, the PM Narendra Modi-led government has backtracked on its promise. Apart from its revocation, we also demand that the Centre should implement the recommendations of the Swaminathan Committee report.”

Yatri said, “Those behind Lakhimpur Kheri incident should be given the strictest punishment. Family members of farmers who died during the year-long stir should be adequately compensated.”

In Fatehgarh Sahib, farmers held a protest in front of the Deputy Commissioner office against the recently introduced Electricity Amendment Bill 2022. The farmers raised slogans against the Union Government and burnt its effigy. They also disrupted the traffic on the Fatehgarh Sahib-Chandigarh road. Jasbir Singh and Gurmeet Singh, SKM leaders, told the media that the Centre had been conspiring and making laws just to benefit the corporates. They alleged the government had backtracked from its promise of not introducing the Bill without consulting the SKM. The farm union has planned a protest against the the Centre on August 22 at Jantar Mantar in Delhi.