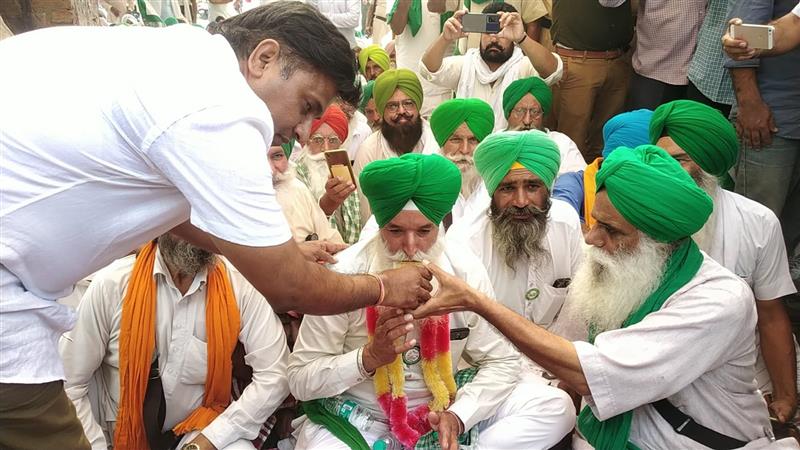 Muktsar: The district president of the Bharti Kisan Union (Sidhupur), Sukhdev Singh Bura Gujjar, ended his indefinite fast after getting an assurance from Faridkot Range IG Pradeep Kumar Yadav that suspended Agriculture Development Officer (ADO) Sandeep Behal would be arrested within a few days. Gujjar was on fast outside the Agriculture Department office here for the past seven days. TNS

Gangster taken to Asr on remand

Mohali: The Amritsar police today took gangster Jaggu Bhagwanpuria on transit remand from the Kharar court in the extortion case of a doctor. He was produced in the Kharar court on September 10, from where he was sent on police remand. — TNS

Chandigarh: As many as 14 lakh children were immunised in the three-day pulse polio campaign, under the Sub-National Immunisation Day drive, said Health Minister Chetan Singh Jouramajra on Wednesday. The door-to-door drive was carried out in 12 districts. SBS Nagar topped the drive with 100% immunisation followed by Fazilka (99.5%), Tarn Taran (99.4%), Muktsar (98.7%) and Bathinda (97.5%). TNS

Muktsar: Unable to get admission to a college due to his family’s poor financial condition, a 22-year-old youth allegedly ended his life by hanging himself at his residence at Chak Sherewala village here. The deceased, Jagmeet Singh, alias Vicky, was reportedly good in studies and sports and had scored well in his Class XII in 2019. The police have initiated inquest proceedings under Section 174 of the CrPC. TNS

Chandigarh: Finance Minister Harpal Singh Cheema on Wednesday said the Finance Department had released Rs 646 crore for major schemes so far. Cheema directed the departments concerned to utilise the funds in a time-bound manner rather than waiting for the end of the financial year. He said any lapse of funds due to non-utilisation shall be taken seriously by his department.