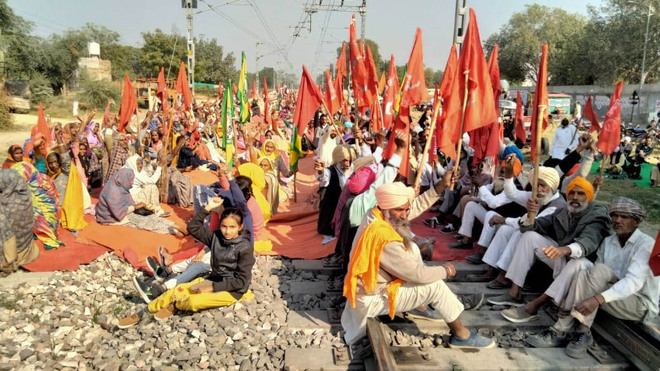 Members of labour unions squat on the railway track at Sangat in Bathinda on Sunday. Tribune photo

Train passengers had a tough time today with rail traffic being disrupted for four hours (noon to 4 pm) due to a ‘rail roko’ protest by farm workers demanding repeal of amendments to labour laws, Rs 700 a day & 200 days work under MGNREGA, waiver of pending electricity bills and restoration of connections, and free plots to farm workers.

Protesters alleged the demands made in the meeting of the Joint Workers' Front with Chief Minister Charanjit Singh Channi on November 23 were not met despite repeated assurances. They warned the Punjab Government that if the demands of the workers were not met they would intensify their struggle.