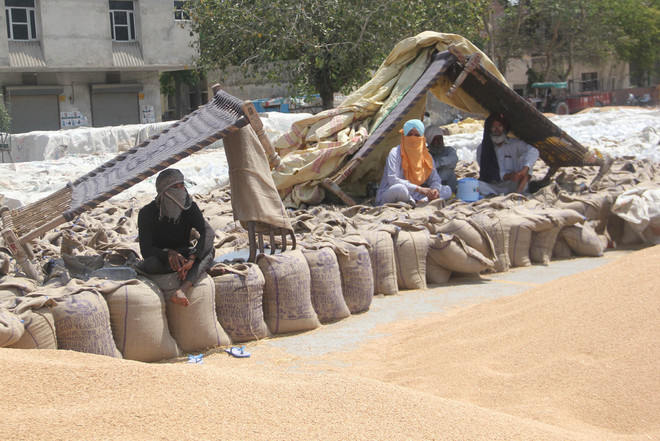 Farmers in Punjab along with the commission agents (arhtiyas) have decided to fight tooth and nail the Centre’s decision to make direct payment in their accounts for the foodgrains procured from them on the MSP. File photo

Farmers in Punjab along with the commission agents (arhtiyas) have decided to fight tooth and nail the Centre’s decision to make direct payment in their accounts for the foodgrains procured from them on the MSP.

Farmers, who are the beneficiaries of the DBT scheme, are opposing it, saying that the Centre was trying to push the most important keg in the present mandi system (arhtiya) into oblivion to implement its three new farm laws.

Balbir Singh Rajewal, president of BKU Rajewal, said earlier too the government had wanted to go ahead with the DBT, but only three farmers in the state opted for it. “The situation is no different now. We understand why the arhtiyas are being attacked. It is mainly to push them out and give a free field to the private players to operate. The system will not work at all, as the tenant farmers get the land on lease only through a mutual settlement, without their names as cultivators being recorded. How will they prove that they are the producers of grain?” he asked.

The Punjab Government has formed a high-level delegation of three ministers and chairman of the Punjab Mandi Board, to meet Union Food Minister Piyush Goyal on Thursday and resolve the issue regarding direct payment to farmers.

The CM is only enacting a ‘drama’ on the DBT system for payment to farmers as he is supporting the central government. Bhagwant Mann, state AAP president