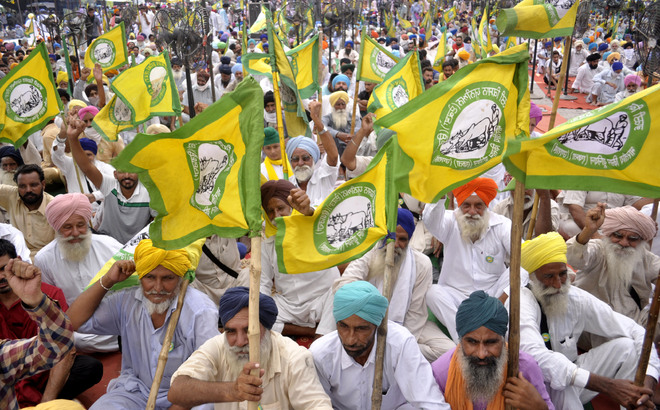 With all political parties in Punjab trying to prove themselves to be most farmer-friendly, farmers have rejected their offer of joining their state-wide stir.

From the beginning of this week, all prominent farmer unions have been protesting against the three farm Bills passed by the Lok Sabha. Two major dharnas are going on, one in Patiala, the hometown of CM Capt Amarinder Singh, and second at Badal village, outside the residence of Akali Dal president Sukhbir Singh Badal. Farmers have also been laying siege to national and state highways.

Balbir Singh Rajewal, president of BKU (Rajewal), said they want to fight on their own. “There is no way that we will take support from the politicians, who change colours once voted to power. If the farmers can feed the entire country, they can also fight for their cause and bring the country to a halt. Any politician who fails to support us and favours these Bills, will be taught a lesson,” he said.

Gearing up for a joint meeting of all major farmer unions at Moga tomorrow, Jagmohan Singh Patiala, general secretary of Bhartiya Kisan Union (Dakaunda), said political histrionics and changing stands on the Bills do not impress them. “Our livelihoods and the future of farming as a viable employment avenue is at the stake. Politicians, cutting across party lines, are only concerned about their votes. Once they get elected, they forget about farmers and start favouring corporates. After all our votes help them come to power and the corporates’ money keeps them in power. That is why we have rejected offers from the politicians to be part of our protests,” he said.

Yesterday, an AAP delegation had offered to support the farmers’ six-day dharna at Badal village. Sukhdev Singh Kokrikalan, general secretary of BKU (Ekta Ugrahan), said they outrightly rejected the offer. “Politicians want to use our protests for their political gains. Just as we are protesting, let these parties, too, launch similar agitations if they support us. Their political statements will not suffice. If they are serious, they need to do much more to save the farm economy,” he said. In the coming days, the unions intend to start “rail roko” campaigns, while a complete bandh call has been given for September 25.