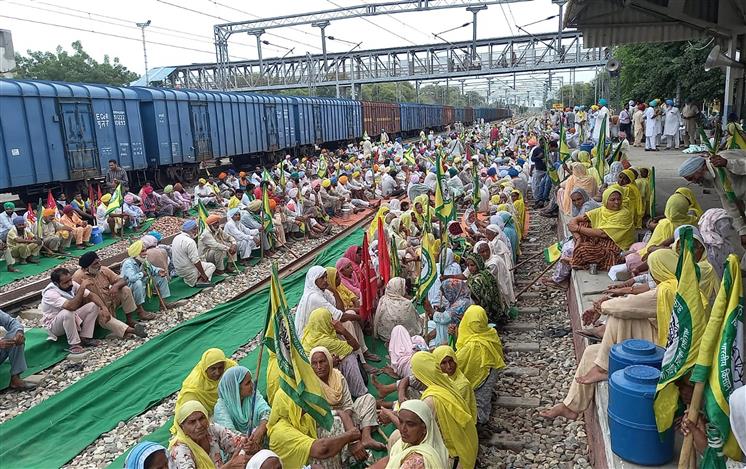 Scores of farmers under the banner of the Bharti Kisan Union (Ekta Ugrahan), blocked railway tracks in Bathinda and Mansa today, demanding compensation for the cotton crop destroyed due to pink bollworm attack, cancellation of cases registered against the farmers under the Mining Act and revocation of new conditions for the procurement of the paddy crop.

Shingara Singh Mann, general secretary, BKU (Ekta Ugrahan), said, “Only a limited number of farmers had received compensation for the damaged cotton crop. There are many who have not received the relief so far. Despite being promised, labourers have not received anything from the government. During kharif season, crops got damaged due to heavy rain, whitefly and pink bollworm attack, but the government has not conducted girdawari. Moreover, farmers should be allowed to do mining in their fields.”

Harjinder Singh Baggi of the union said, “Cases registered against the farmers and activists during farm agitations should be cancelled. Polluted water should not be released in the water bodies and canal water supply to around 1,300 acres in Fazilka district must be resumed.”

Baggi said, “Provide adequate price to the farmers for their land to be acquired under the ‘Bharatmala’ project. Farmers who suffered losses due to the lumpy skin disease should also be compensated.”