DCs asked to delete red entries in their revenue records 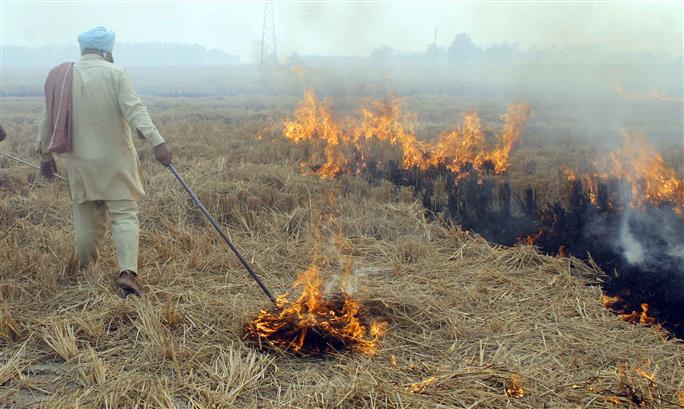 Farmers are upbeat while the enforcement officials are upset over the state government's order to let off the landowners who were caught burning stubble in their fields.

Farmers are upbeat while the enforcement officials are upset over the state government’s order to let off the landowners who were caught burning stubble in their fields.

In what appears to be insensitivity towards environment and a bid to woo the farmers, the Aam Aadmi Party government has ordered to withdraw its previous order wherein those found burning paddy stubble in their fields were blacklisted by making red entries in their revenue records.

Our strength and power has once again forced the government to rollback its illegal order, depriving us of using our land. Harwinder Singh, a farmer

We feel dejected after the announcement of the government order. Who will work to enforce orders in future, if the rulers withdraw their diktats later? Field officials

The Revenue and Rehabilitation Department, in an official communication to all Divisional Commissioners and the Deputy Commissioners in the state, has conveyed that the state government has decided to withdraw its previous order, which had mandated to make red entries in the revenue records of the farmers found burning paddy stubble.

“Reference this office letter dated October 4, 2022, which had ordered making red entries in the khasra numbers (revenue records) of those found burning paddy stubble to check environment pollution, is hereby withdrawn,” the government order read, while asking the divisional and district authorities to circulate the directions among all the field officials/employees concerned.

The government order has led to enthusiasm among farmers while the official machinery, which was out in the fields, spotting those burning crop residue, were left disappointed.

“Finally, we’re relieved,” an octogenarian farmer Santokh Singh of Samrala said on being told about the government order. “What is our fault? We resort to stubble burning when we don’t have any other option to manage crop residue,” said Kuldeep Singh, a landlord of Jagraon.

Another peasant of Sahnewal, Hardeep Singh, whose revenue record had been marked red and hefty penalty as environmental compensation was imposed on him, welcomed the government decision, while adding, “better late than never”.

“Our strength and power has once again forced the government to rollback its illegal order, depriving us of using our land,” a young farmer of Khanna, Harwinder Singh, retorted.

On the other hand, the officials of the Agriculture and Revenue Departments, which remained in the fields all through the current kharif season to spot the farm fires and initiate action against the violators, were left dejected by the government order.

“Who will work to enforce the government orders in future, if the rulers withdraw their diktats later?” questioned the field officials, most of whom had even faced the wrath of the farmers while stopping the stubble burning and initiating action against the violators.

Following the previous government order, thousands of farmers had been blacklisted with red entries in their revenue records besides imposing lakhs of rupees as environmental compensation for stubble burning across the state this season.

In Ludhiana alone, at least 737 farmers were fined Rs 16-lakh while 571 peasants were blacklisted for farm fires.

About 50K cases recorded this year