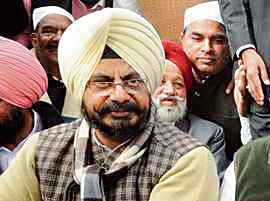 The wife of MLA Kuljit Singh Nagra faced opposition from a section of villagers during her visit to the district’s Dubhali village to get the rainwater accumulated on 400 acres drained off.

A large number of villagers also came in support of MLA’s wife Mandeep Kaur. There were slogans and counterslogans. Though she tried to pacify the protesters, they didn’t relent. She left amid sloganeering. The purported video of the incident has gone viral.

Mandeep’s supporters claimed the villagers had approached several leaders over the rainwater accumulation, but to no avail. However, she coordinated with officials and ensured the job was done. The MLA’s wife said the opposition seemed politically motivated. —