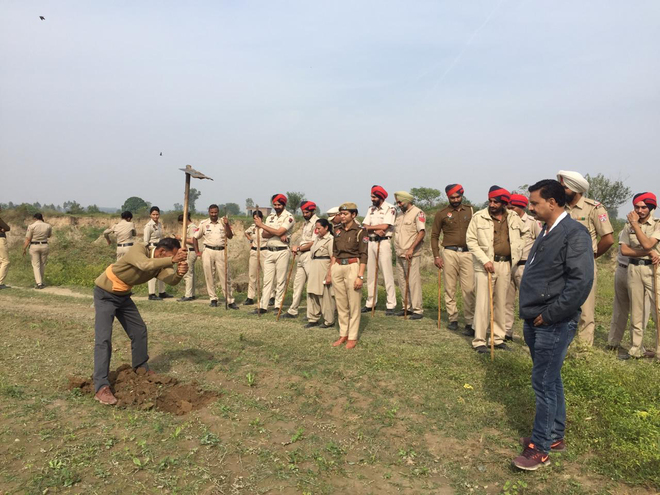 The Pathankot Forest Department today reclaimed 55 acres of prime land near Mirthal, near here, after a protracted 25-year-old legal battle which saw the encroachers petitioning the Supreme Court claiming that “the land was theirs.”

Over 50 cops deployed for operation

Going by the prevailing rates, the land is said to be worth more than Rs 17 crore. Dr Sanjeev Kumar Tiwari, Divisional Forest Officer (DFO), had to take the help of more than 50 policemen after he received inputs that a potentially volatile situation could develop if his team went about the task alone.

The land mafia had the “backing of powerful politicians” following which the DFO took into confidence Deputy Commissioner Ramvir and SSP Deepak Hilori before dispatching his team to the site today morning.

The Revenue Department, too, was asked to join the operation. “The encroachers had moved the Supreme Court. However, we moved into action after the court rejected their claims. The mafia, sensing that it was fighting a losing battle, approached people who indulge in mining activities. However, we moved in before they could secure a deal with the mining mafia whose connections with the political class are well known,” said Tiwari.

The DFO added that encroachments in and around the city had resulted in loss of protected spaces, wildlife habitats and forest corridors. “Encroachments around the Beas and Chakki have affected the river flow for years. We are looking into this aspect too,” he said.

An officer said Pathankot was a forest-rich district and such encroachments were common. “However, with today’s operation, a clear message has gone out. We have reports that some encroachers are voluntary willing to move out,” he said.

After taking possession, the team was quick to launch another operation where it planted 3,000 saplings while 5,000 more will be planted by the end of this week.