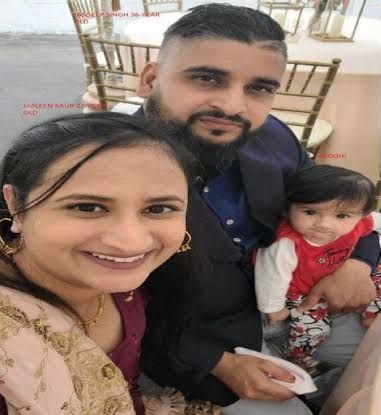 All four Hoshiarpur-based family members, including an eight-month-old baby girl, who were kidnapped in Merced County, California, earlier this week, have been found dead in an orchard, officials said.

The victims, originally from Harsi Pind in Hoshiarpur, were kidnapped from their newly opened transport business in Merced on Monday.

They have been identified as Jasdeep Singh (36), his wife Jasleen Kaur (27), their eight-month-old daughter Aruhi and Jasdeep’s brother Amandeep Singh (39).

The news of their killing has sent shockwaves in their village here, with the locals demanding exemplary punishment for the culprit. The family, which migrated to the US 16 years ago, had planned to visit India to celebrate their daughter’s first birthday.

A family friend, Charanjit Singh, said the parents of the slain brothers, Randhir Singh and Kirpal Kaur, who retired from health and education departments, respectively, left for the US after they received information about the kidnapping earlier.

He said even though the family permanently migrated to the US, they kept visiting the village regularly. “The marriage of both brothers was also solemnised here. The family was to visit the village in January to celebrate Aruhi’s first birthday on January 23. They had even booked their flight tickets, but who knew that destiny would unfold such a tragedy,” said Charanjit.

Amandeep is survived by his wife and two children. Urging the government to ensure the safety of Indians abroad, Harsi Pind sarpanch Simran Singh said the incident had left the villagers shocked.

Raising concern over the safety of Punjabis abroad, the Chief Minister has sought necessary action by the ministry for impressing upon the authorities in the United States to conduct a thorough probe into the murders.