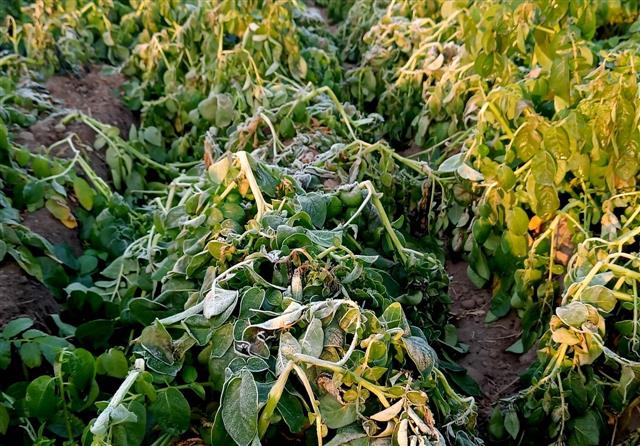 With a cold wave sweeping North India, ground frost has damaged the potato, mustard and other rabi crops except wheat in certain parts of the southern Malwa belt.

Rain can be beneficial

A spell of rain will benefit the mustard and other rabi crops. If the extreme winter continues for another fortnight, it will damage the mustard crop. Agriculture experts

Bathinda district has been experiencing the coldest weather for the past few days with temperature going below zero degree Celsius here. This has badly hit vegetables at Rampura Phul in district where potato is grown on 12,000 acres.

However, freezing weather conditions are favourable for wheat crop and boost its productivity, according to experts.

The leaves of potato plants in the region have completely wilted due to the frost. A leaf is where photosynthesis takes place and it is the main requirement for the growth of a tuber.

Veerpal Singh of Sivian village said, “Frost is badly affecting mustard and potato crops in the region. But it is beneficial for the wheat crop.” He demanded that the government should support vegetable growers.

Another farmer, Amarjit Singh, said the ground frost had taken a toll on the tomato crop also. Tomato, mustard and potato crop was affected in many villages of the region, he said.

Prithpal Singh of Mandi Kalan said he had sown potato crop on 10 acres that was adversely affected due to frost. The potato grower also pointed out that 20 to 30 per cent of the crop in the district had been affected by the ground frost.

Rampura-based potato grower Amritpal Singh said the late-sown potato varieties were the worst affected. “Though the occasional sunshine during the day brings some respite, the ground frost is doing considerable damage to the early sown varieties,” he said.

The growers claimed that crops could be saved by irrigating fields, but there was no power supply in the night. They demanded that power should be supplied at night also.