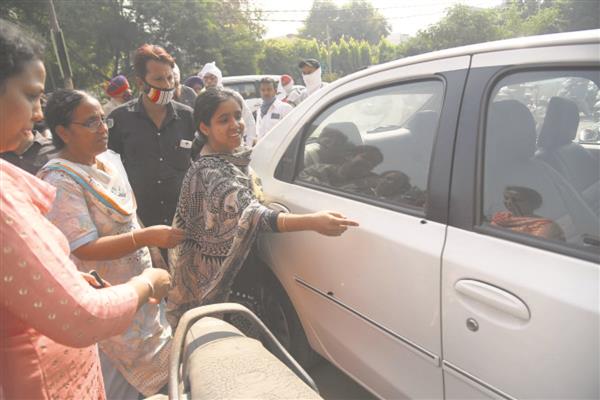 A woman shows bullet marks on a car outside the Muthoot Finance office on the Dugri road in Ludhiana. Tribune photo

Minutes after the staff opened the company’s Dugri road office around 9.15 am, six masked men arrived there on motorcycles. Five of them entered the office located on the first floor and held the staff captive at gunpoint. They filled their bags with around 30 kg gold.

Since the staff could not mark their attendance, company’s Delhi control room got suspicious and checked the CCTV cameras, only to find that a robbery was on in its Ludhiana branch. The Delhi staff alerted the Ludhiana police, following which cops from the Model Town police station reached the spot.

As the robbers tried to flee on motorcycles, the company staff, public and police challenged them. Cornered, the robbers fired over a dozen rounds, injuring three staff members and a civilian.

The injured were indentified as Muthoot employees Mahinder Singh, Aditya Sharma and Surinder Kumar and civilian Daljit Singh. Also, staffer Umesh Kumar suffered a fracture while fighting with the robbers.

While three suspects were captured, the other fled the scene. Those arrested have been identified as Roshan Kumar Tatiya (23), Sourav Kumar (18), both of Vaishali, Bihar, and Kamlesh Kumar, 25, of Nalanda, Bihar.

The police were verifying whether the suspects came from Bihar on motorcycles or used some other mode of transport. He said company employees, public and cops displayed bravery in nabbing the suspects and would be rewarded by the police department. Interestingly, a video went viral showing the staff cornering the robbers and an unarmed policeman seen challenging the suspects, braving a barrage of fire.