Was part of the team that won the Blind Cricket World Cup in 2014 | Now, he’s doing a menial job to make ends meet 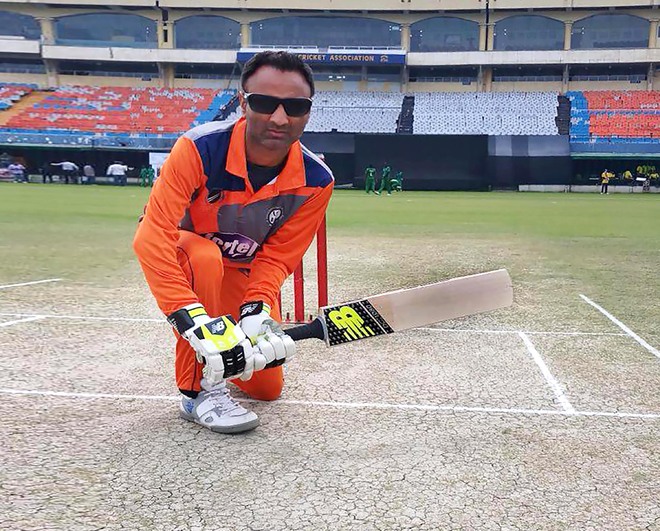 Reason: He’s expecting an important call from the Punjab Sports Department, but each time he is disappointed.

Tejinder was the only player from Punjab, who got selected in India’s blind cricket team in 2014 that won the Blind Cricket World Cup in South Africa in 2014 and the England World Cup in 2015, but despite this, his achievements and efforts never got recognised. At present, he does not even have money to buy a bat of his own.

No help from govt so far

On being asked whether he tried approaching the Punjab Government, Tejinder said, he approached the officials of the Sports Departments many times in the past, but to no avail. “I urged them to at least provide me a job, if not any monetary benefit so that I can keep on promoting blind cricket in the state, but leave alone a job, I didn’t even get a reply,” he said.

He said though his counterparts in states such as Haryana and Delhi got Rs25 lakh to Rs50 lakh each along with government jobs, he was still awaiting help from the Punjab Government. Besides, it’s been five years now that he has quit the game. Reason: lack of rewards and recognition from the state Sports Department. “I belong to a poor family and after losing my eyesight, making a career in sports was the only option left with me to support my family and make them proud, but it seems even after proving my mettle in the world of cricket, I failed as a son and I’m not able to financially help my father.”

Tejinder said unlike other cricketers, it was never a run for name, fame, recognition, glittering award ceremonies and loads of financial opportunities. For him, it was a lone struggle to fight for his existence in this world and not be a burden on his family. “I always thought that if I win the World Cup one day, I will be offered a government job and then I would finally retire my father from his tailoring job, but unfortunately, my dreams are still dreams and I am now working as a Class III employee in PAP here to make both ends meet,” he said.

On being asked how he lost his vision and what all challenges he faced as a blind cricketer, Tejinder said he lost his eyesight at the age of six, when a medicine given to him by a doctor at Nawanshahr had an adverse reaction. “My family after that took me to a number of hospitals. I even got a lot of surgeries done, but doctors said my vein in the retina has been blocked and my eyesight could never be restored now,” he said.

Sharing his cricket journey, he said since his childhood, he was interested in cricket and had this aim to make a career in cricket only. “After I lost my vision, someone suggested that I take admission to a blind school in Dehradun. And, it was there, my game found a vision, and I started playing district, state and national-level cricket tournaments. Also, while studying at DAV College in Chandigarh, I represented the state twice in various tournaments. Besides, I also had the opportunity to play from Rajasthan, Himachal Pradesh, Haryana and Uttar Pradesh.”

Talking about challengers, Tejinder said, the biggest challenge for him was to carry forward the game, when there was no governing body for the blind in the state.

“During every international tournament, instead of concentrating on my practise sessions, I had to spend time knocking at the doors of various industrialists and politicians to sponsor my kits and my air tickets. It was only due to the NRIs, among other persons, who sponsored my air tickets that I could play in the Cricket World Cup,” he said.