Have plan to make Punjab No. 1: Channi 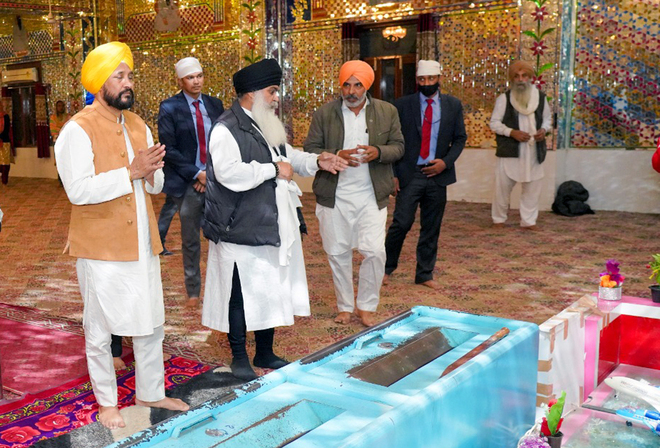 CM Charanjit Singh Channi at a gurdwara in Moga village.

Claiming that he has steered Punjab back on the path of development, Chief Minister Charanjit Singh Channi today said the money collected from the people in the form of taxes was being spent for their welfare and development of the state. He said the Congress had already prepared a roadmap for development which would steer the border state to the number one position in the country. In the years to come, the Punjab model be followed by other states, stressed Channi.

Addressing a rally at Baghapurana town in Moga along with PCC president Navjot Singh Sidhu, he lashed out at AAP national convener Arvind Kejriwal for misleading people of the state.

Reiterating he was the real ‘aam aadmi’, Channi said the AAP national convener was trying to fool the people of Punjab in the name of Delhi model. “He is not giving Rs 1,000 per month grant to women in Delhi, but has promised the women here just to get their votes,” he said.

He claimed Kejriwal was himself interested in becoming Punjab’s CM, and that was why he was not announcing the CM candidate. Attacking the Badal family, Channi said cable, drug, sand and transport mafias all thrived under their rule. “Today’s raid of the Enforcement Directorate against the cable mafia is a welcome but a delayed decision,” he said, adding that the state government, too, had would make Badals accountable for their acts. Meanwhile, in Ferozepur, Channi said he would not take any decision under pressure being mounted by various unions. He gave this statement after teachers’ unions protested during his visit at Village Mohan Ke in Guruharsahai. — TNS