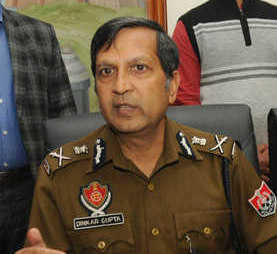 The Punjab and Haryana High Court on Tuesday stayed the operation of the order by the Central Administrative Tribunal setting aside the appointment of Dinkar Gupta as Punjab Director General of Police.

The Bench of Justice Jaswant Singh and Justice Sant Parkash Singh also issued notice to the state of Punjab, the Union of India and other respondents for February 26.

The Bench also directed the state of Punjab to file an affidavit on material forwarded to the UPSC regarding each officer considered. The direction was in response to the argument that complete facts were not mentioned in the material sent to the commission.

The bench also directed the filing of affidavit by the UPSC on restrictions regarding the number of officers considered.

The direction followed the argument that all ADGPs with 30 years’ experience were in consideration zone.

Punjab had forwarded names of 12 officers.

Going by the DoPT guidelines, the state otherwise could have forwarded five names for one post of DGP. Dinkar Gupta would have been out of the zone of consideration.

The state of Punjab as well as DGP Gupta on Monday had approached the high court, challenging the CAT order.

The next date for hearing has been fixed for February 26.

On January 17, the CAT had set aside the appointment of Gupta as the state police chief that had come as a big blow to the Congress-led Punjab government.

A two-member bench of CAT chairman L Narsimha Reddy and M Jamshed had pronounced the order on an appeal by senior IPS officers Mohammad Mustafa and Siddhharth Chattopadhyaya, who had challenged Gupta’s appointment on the grounds that they were “ignored” despite being senior to Gupta.

The police officers also opposed the contention of the empanelment committee, which had sent a report to the UPSC saying the officers lacked experience in core policing areas.

Gupta was appointed the DGP in 2019. He superseded five senior officers, including Mustafa and Chattopadhyaya.

In his previous stint, Gupta was posted as the director general of police (intelligence), Punjab. With PTI