Even as the industry spent more on the road transport to move goods during the farm stir, nearly 3,460 fuel stations in Punjab could not reap the benefit of increased demand.

Higher fuel prices and VAT proved to be a dampener. People living in the border districts and transporters purchased fuel from states where it was cheaper. Gurmeet Monty Sehgal, spokesperson, petrol pump dealers’ ASSN Punjab

Reason: Costlier fuel prices due to higher value added tax (VAT) compared to the neighbouring states. This resulted in higher sales in Haryana, Chandigarh and Himachal Pradesh, where the fuel rates were cheaper. 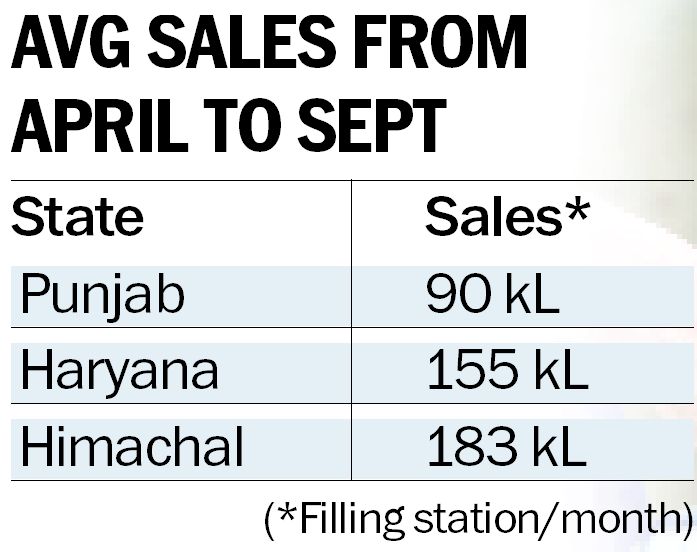 According to estimates, the industry in Punjab spent over Rs 2,500 crore extra on account of road transportation as the train services were disrupted for over two months.

The state government claimed with the decision, Punjab now had the lowest petrol rates in the region (barring UT Chandigarh) and the rates of diesel were also much lower than in Haryana and Rajasthan. Prior to that, VAT on petrol and diesel was highest in Punjab.

“The farm agitation did not have much impact on fuel sales. In fact, it was higher fuel prices and higher VAT that proved to be a dampener,” said Gurmeet Monty Sehgal, spokesperson, Petrol Pump Dealers’ Association Punjab.

According to truck owners, vehicles used to get refuelled in states where the fuel rates were cheaper, as the cost of transportation went up by almost 50 per cent. Around 800 fuel stations in the border districts of Mohali, Ropar, Pathankot, Hoshiarpur, Sangrur, Patiala, Fatehgarh Sahib were the worst hit.

The average monthly sale of petrol and diesel in Punjab was 90 kL per fuel station from April to September. To sustain, a fuel station should on an average sell 100 kL. Around 72 per cent or 2,492 pumps were selling less than 100 kL per month.

In Haryana, which has 3,130 petrol stations, the monthly sale was around 155 kL per fuel station.