Recordings of calls by gangsters in public domain now 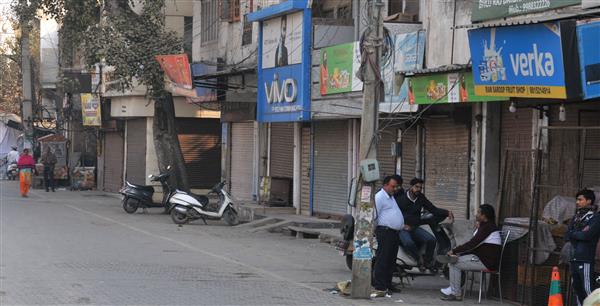 Following the murder of businessman, a complete bandh was observed in Nakodar on Thursday.

A series of phone calls from gangsters to Timmy Chawla shook his family in the early days of November. The police were intimated all through and every single call was reported. The calls, which are now in public domain and have gone viral, reveal the brazen manner in which gangsters repeatedly threatened the Nakodar businessman fully knowing that he had reported the matter to the police.

The calls also have the gangsters repeatedly asking Timmy: “How long will the police protect you?”

Subsequently, a series of calls were made through two weeks up to November 10. Thereafter, the family blocked the numbers. Five such recordings are in public domain.

Timmy’s cousin, Shaify Chawla, said: “We received the first call on November 1, in which a man who claiming to be a member of the Rinda gang, sought Rs 20 lakh from us. The gangsters said they knew all about our business and that our shop got a lot of customers. They asked us to give earnings of five to six months, which they pegged at Rs 20 lakh.”

Shaify said the first call was not recorded because it was on an iPhone. While the family lodged an FIR on November 3, Shaify said police assured that the calls were being traced and the culprits would be caught soon. Soon, two gunmen were also deployed. The family said even after the last call, the police assured them that the culprits would be traced soon.

In the first few calls, the callers repeatedly told the family that they were monitoring their activities and knew about their cars, scooters and movement. They hiked the extortion money from Rs 20 lakh to Rs 30 lakh since a complaint had been made to the police.

In another call, picked by Timmi’s cousin, the gangsters are heard threatening the family of a lifelong enmity since they had lodged a police complaint.

The subsequent calls became more menacing as the callers initially gave him 10 days, and eventually two days, after which they threatened to do something.