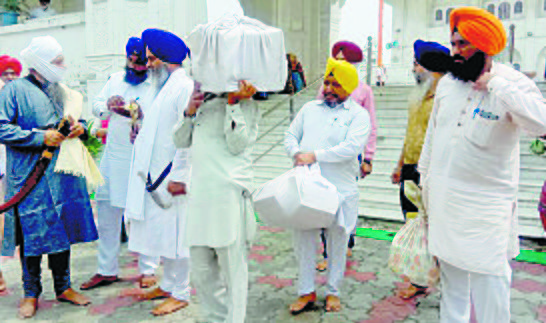 The Punjab Human Rights Organisation (PHRO) led by Justice Ajit Singh Bains (retd) has demanded criminal proceedings against officials concerned and SAD leaders for misguiding the ‘sangat’ on the number of ‘saroops’ damaged in a fire incident at Guru Granth Sahib Bhawan, Gurdwara Ramsar Sahib, in 2016.

In what could put the Shiromani Gurdwara Parbandhak Committee (SGPC) in a peculiar situation is an official note regarding the ‘saroops’ that were damaged in the fire. The official note, presented by the then assistant supervisor of the Publication Department Kanwaljit Singh in February 2020, had mentioned that 80 saroops were damaged, either directly in the fire or due to water sprinkled over them in an attempt to douse the flames. Besides white ‘rumale’, sheets and mattresses were also damaged. Since the ‘saroops’ could not be used for the ‘parkash’ ceremony, these were cremated at Goindwal Sahib. The note was endorsed by former Chief Secretary Roop Singh and marked to the deputy secretary, SGPC, for noting on ledgers.

We fear that to save the SAD leadership from the wrath of the ‘sangat’ prior to the 2017 polls, the truth was concealed by SGPC officials. Soon after the fire incident, the in-charge of the Publication Department had recorded his statement about five damaged ‘saroops’, whereas the official records say no less than 80 were damaged.

Apparently, to console the Sikh sentiments, the SGPC had then declared that just five ‘saroops’ were damaged in the fire that had occurred during the intervening night of May 18-19, 2016.

Roop Singh, who had resigned on moral grounds, said the note was from Kanwaljit’s side and he had just forwarded it for further process.

When Kanwaljit, nearing his retirement on May 31, 2020, had revealed the disappearance of 267 ‘saroops’ (which were revised to 328 after probe), the SGPC had snubbed him. On June 27, SGPC’s senior vice-president Rajinder Singh Mehta had claimed that 14 saroops and not 80 were damaged in the 2016 fire incident.

Surjit Singh, a PHRO activist, said they wanted to know why and on whose behest the truth was being concealed. “We fear that to save the SAD leadership from the wrath of the ‘sangat’ prior to the 2017 polls, the truth was concealed by SGPC officials. Soon after the fire incident, the in-charge of the Publication Department had recorded his statement with the police about five damaged ‘saroops’, whereas the official records say no less than 80 were damaged. Further, the SGPC claimed only 14 were damaged. What prompted them to tell a lie? We have urged the SGPC president to lodge a criminal case against the officials concerned,” he said.

Mehta said he had mentioned 14 damaged ‘saroops’ as per the report of the flying squad that probed the incident. “I stand by the figure of 14 as per records. The report, which is on record, stated that five ‘saroops’ were directly affected by fire and nine others were damaged when water was used to douse the flames. Kanwaljit had prepared a wrong note to cover up his involvement in misappropriating the ‘saroops’ in connivance with others. The PHRO has lodged a complaint on the basis of a report from a person who is already under scanner and liable to face legal action,” he said.

It stipulates that the state shall take measures to strength...