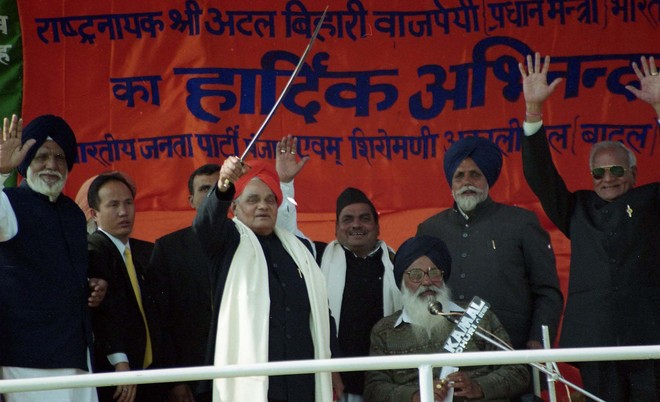 Atal Bihari Vajpayee flanked by Parkash Singh Badal and other leaders at a rally in Ferozepur. file

A story doing the rounds is that when SAD leader Harsimrat Kaur Badal sent her resignation to the PM in protest against the agriculture legislations, “he just took and signed it”. Without getting into debate over its authenticity, what the BJP wants to convey is that if Harsimrat was hoping that she will be asked to stay back or that the PM will relent with an assurance on re-think on the laws, it did not happen.

“These reforms are not about one state, but the entire nation. We stood by them (Akalis) even when it meant sacrificing aspirations of our cadres (in Punjab). The local leadership had been demanding it (separation) for long, but the BJP never walks out on allies with whom we have long associations,” said a leader who did not wish to be named.

Several BJP leaders see it as an opportunity. Rajya Sabha MP Shwait Malik says, “Sky is the limit now. You will see how fast the BJP grows in Punjab. Because we were limited to 23 seats, our political space also remained limited. We will reach out to everyone and spread the right message on the agriculture reforms.”

Regarding new laws, he says, “They resigned because of political compulsions. The Congress was misleading farmers and they got caught in its misinformation campaign.”

The feelings that Akalis let the BJP down is evident from what senior BJP leader Ravi Shankar Prasad said, “She (Harsimrat) was a part of the Cabinet where the decision was taken. She only asked if it was legally possible and as the Law Minister I clarified. She has been a distinguished minister in the Cabinet and I would like to remember her like that.”

However, a section has some reservations. “The alliance was a symbol of Hindu-Sikh unity. Now, it will be free-for-all in the sensitive border state.”