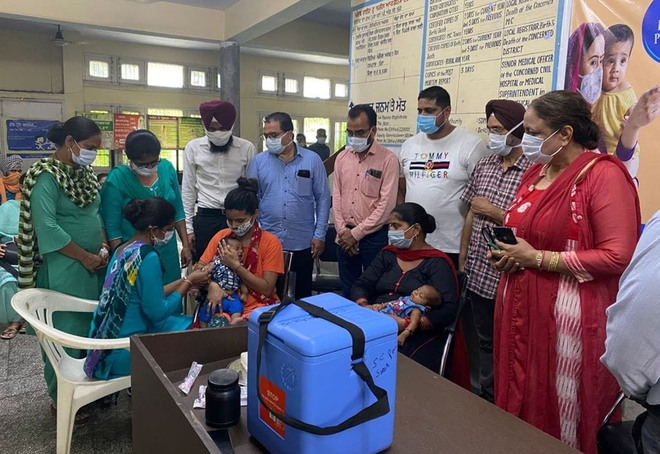 A file photo of children being vaccinated in Nawanshahr.

The gains made on the vaccination front over the years have been squandered with the National Family Health Survey-5 (NFHS-5) showing a drop of 13 per cent in the past five years in the state.

According to the survey, the number of children (aged 12-23 months), who were vaccinated with BCG, measles, three doses each of polio (excluding polio vaccine given at birth) and DPT or Penta vaccines, witnessed a 13 per cent drop as compared to the last survey. The number, which was 89 per cent in the NFHS-4 (2015-16), has come down to 76 per cent.

Similarly, the percentage of children (9-35 months old) who received vitamin-A doses in the past six months has also declined by five points.

Dr Balwinder Kaur, State Programme Officer for Immunisation, said the department was getting regular monthly reports on vaccination coverage. “It was not that bad in our regular reports. We are almost meeting the same parameters as in the NFHS-4. We are yet to receive the report officially. We will take appropriate action, once we get the report officially,” she said.

The state witnessed a decline in antenatal checkups of pregnant women. It is an important indicator of maternal and child health. As per the NFHS-5, the percentage of pregnant women who had such checkups in the first trimester was 68.5. This is around seven per cent down when compared to the NFHS-4. Similarly, the percentage of mothers who had at least four antenatal care visits was 59.3. This is also down by over nine per cent.

The state witnessed an improvement in key maternal and child health indicator — institutional births. The percentage of institutional births has increased to 94.3. It stood at 90.5 per cent in the NFHS-4. Of the total, 53.9 per cent deliveries took place in public healthcare institutions. The number of home births came down from 4.5 per cent to 2.6 per cent.