In Patiala, norms batted out during T20I : The Tribune India

In Patiala, norms batted out during T20I 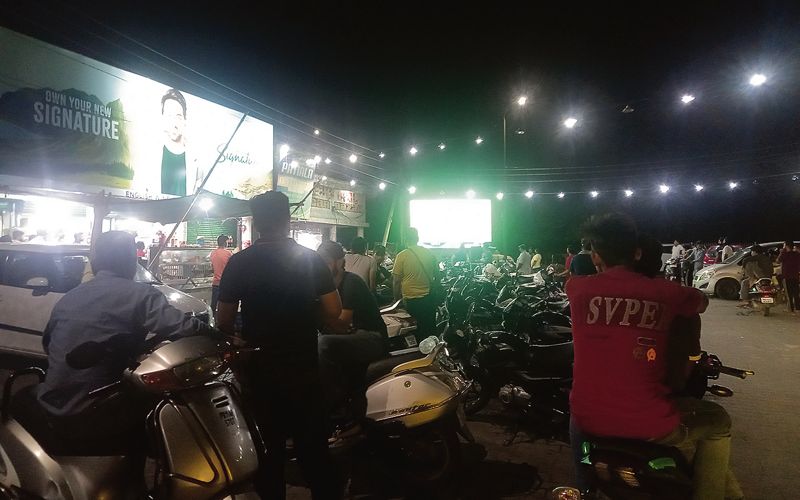 People watch India vs Australia T20I match on a large TV screen put up in front of a liquor shop in Patiala on Tuesday. Tribune photo

Throwing all rules to the wind, a liquor shop put up a huge TV screen in its open parking area late on Tuesday. It allegedly served liquor and snacks in the open to the tipplers who had parked their vehicles in the parking lot.

Some were seen carrying pistols

A few armed men, sitting near the screen, had placed their pistols on the table and were having liquor. So, we left the venue. A student

Over 100 people were seen openly consuming liquor, a majority of them being youngsters with many being underage. As many underage youngsters were served liquor and the shop was open beyond the permissible time limit of midnight, the Excise and Police Departments have assured a probe.

Some people were also seen carrying weapons. “A few armed men, sitting near the screen, had placed their pistols on the table and were having liquor. So, we left the venue,” said a student who watched the match for some time. Meanwhile, the Municipal Corporation has asked the land branch officials to take action for putting up a screen without permission.

A huge screen was put up in the parking area of the liquor shop situated at Mall Road, adjoining Mohindra Kothi. All other shops in the vicinity are shut in the evening.

The liquor shop owners placed chairs and tables outside their premises and the adjoining ‘ahata’ (place where liquor can be served), allowing people to consume liquor.

Onlookers said that people were seen being served liquor and snacks inside the cars parked near the screen showing the India-Australia T20 match.

When The Tribune team visited the spot late night, schoolchildren were also seen consuming liquor. Residents in the vicinity complained of hooliganism and said that they have started avoiding this lane.

Interestingly, the district administration has imposed Section 144 of the Criminal Procedure Code (CrPC), which prohibits the assembly of four or more people in an area, for the past six months.

Assistant Excise and Taxation Commissioner (Excise) Inderjeet Singh Nagpal said that he has issued a challan to the liquor shop concerned for the violations. “For serving liquor to underage persons and keeping the premises open beyond the limit of midnight, we will issue a separate challan,” he told The Tribune.

Patiala SSP Deepak Pareek said that such violations would not be tolerated. He has ordered a probe by a SP-ranked officer. “Once I get the report, we will initiate action,” he added.

Joint Commissioner, Municipal Corporation, Jeevanjot Kaur, said, “No permission was sought from the corporation for the TV screen and officials concerned have been directed to take action against the organisers.”