He managing affairs of his NGO from his residence in Chandigarh 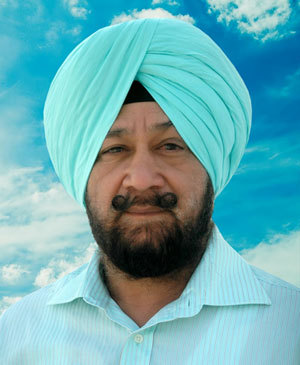 When in Dubai, construction magnate SPS Oberoi used to keep himself so busy that he never knew how the time flew. Even as the businessman was preparing to fly back to his business hub after his recent stay in the country, he got trapped in the lockdown.

The philanthropist was in Gurdaspur district to supervise activities of his charitable organisation, ‘Sarbat Da Bhala’, when the curfew was imposed. He immediately drove to his Sector-5, Chandigarh, residence. Since then he has been in self-quarantine and has been managing the affairs of his NGO from his home itself.

Oberoi is fond of narrating a quote of US-based best-selling author Mandy Hale. “When you find yourself cocooned in isolation and cannot find your way out of darkness, remember that this is similar to the place where caterpillars go to grow their wings. When I feel low, I turn to the cycle of the caterpillar and butterflies for guidance,” he recounts.

The businessman says he is finding himself busier in Chandigarh than what he used to be in Dubai.

“These are trying times for humanity. My organisation has been doing its best to mitigate the problems of the people. We have already donated 12 ventilators to different hospitals in Punjab, including two to the Gurdaspur Civil Hospital. We have also distributed ration, including sugar, pulses and rice, in a big way. Throughout the day, I stay in touch with deputy commissioners (DCs) and district police chiefs trying to coordinate the smooth movement of ration and medical equipment. We have now ordered 22 more ventilators based on demands given by DCs,” he said.

Oberoi’s organisation, which has offices throughout the country and even in Nepal, has already distributed hundreds of sanitisers to police personnel throughout the state. “Policemen doing duty at checkposts are among the most vulnerable to Covid because they are in touch with people from all walks of life. I have also ordered 13,000 personal protection equipment (PPE) kits and 20,000 masks. These will be given to doctors and paramedical staff,” he added.

Oberoi, who is respected all over the world for his philanthropic missions, said it was not an easy time and uncertainty might keep everybody up longer than usual.

“It is useful to meet yourself for real and to understand you are lonely but not alone. And to be sure that when everything is over, we will take care of the things that matter with greater consciousness,” he maintained. “Now, relevant is that nobody should suffer and we should fight the Covid scare in unison,” said Oberoi as he readied himself once again to call a DC on his mobile phone. The official was requesting the businessman for additional 100 boxes of sanitisers and the reply he got was what everybody gets-in the affirmative.