In service of the needy 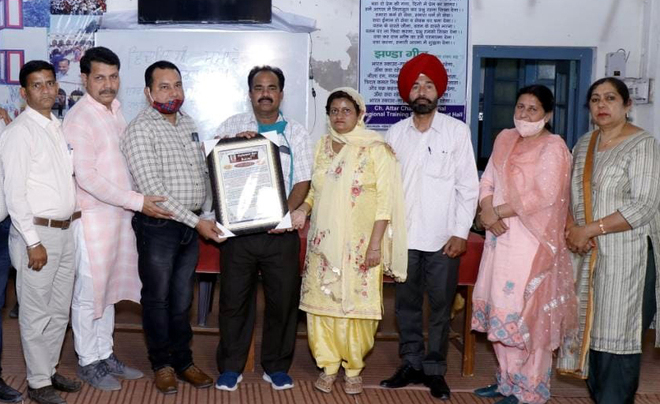 Kulwant Rai being honoured at a function.

Abohar: Kulwant Rai aka Kanti, who recently retired after 28 years of service as physical education teacher, has earned fame as a “mobile orthopaedist”. Nar Sewa Narayan Sewa Samiti chief Raju Charaya says Kanti became a familiar face for treating people free of cost after school hours to give relief from orthopaedic problems. Despite having no regular training, he learnt the art by experience and earned the faith of people for providing treatment of bones and joints free of cost for more than two decades. He treats 80 to 100 patients daily. He even visits the poor and needy people and treats them at his own expense. “I know many people can’t afford treatment expenses at hospitals. I feel honoured when a patient smiles after treatment,” he says.

No bon voyage for this bus

Gurdaspur: The luxury tourist bus donated by Dubai businessman Surinder Pal Singh Oberoi to the Gurdaspur administration to let people to embark on tours of religious places is lying in a state of disuse in the DC’s office. Earlier, the bus was given to Punjabi university to mark the festivities pertaining to the 550th birth anniversary celebrations of Guru Nanak. However, the university, despite repeated requests and reminders from Oberoi, failed to get the vehicle’s registration papers completed. Irked, the businessman then handed over the bus to the DC. The vehicle cannot be registered due to a technicality. A fortnight ago Cabinet minister Sukhjinder Singh Randhawa took up the issue with the Transport Department.

Fatehgarh Sahib: A group of volunteers of the Youth Akali Dal have come forward to donate blood plasma to Covid patients. Sarabjit Singh Jhinjhar, district president, YAD, has issued a helpline number asking Covid patients to send SOS whenever they are in dire need of plasma. He said they were getting regular calls and rushing youths for donations.

Chandigarh: One of the oldest Punjabi magazines “Sirjana” has brought out its 200th issue. The magazine was started way back in 1966. Since then, the quarterly was regularly published. Last week, its 400-page mega 200th special issue was brought out by editor Raghbir Singh, former teacher of Punjabi literature at Panjab University, Chandigarh. The magazine is known for introducing three generations of writers to Punjabi readers.