After the dwarf disease, now incessant rain coupled with gusty winds has poured misery on a large number of farmers in the district in the past week, officials said.

Rainwater from most of the fields, which were inundated till Sunday, is now receding. As a result, the flattened paddy crop is also reviving. So far, no visible damage to the crop has been reported from major parts of the district. — Dr Amanjit Singh, Chief Agriculture Officer, Ludhiana 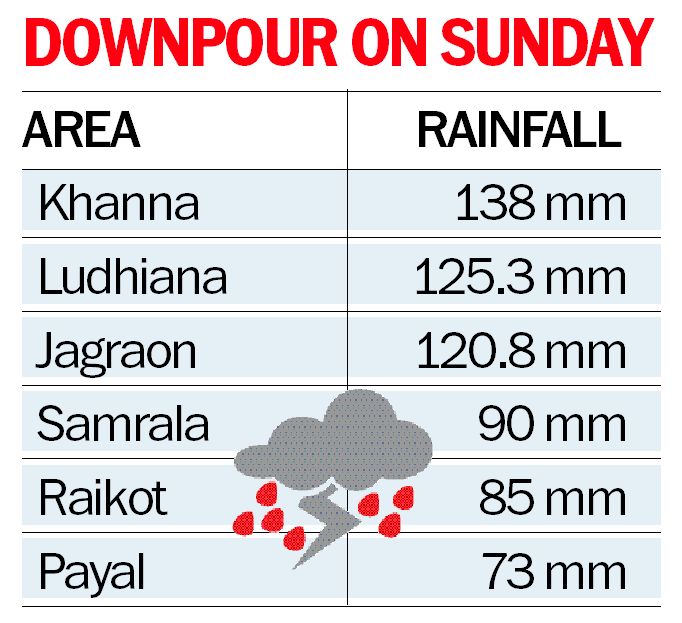 With farmers of the largest district in the state, in terms of area and population, staring at losses, preliminary estimates have revealed that standing paddy on at least 40,000 hectares, which constitute 15 per cent of the total area under the crop, has been inundated while nearly 13,000 hectares of almost ripe rice plants have been flattened.

After rain, a sunny day on Monday has, however, revived the hope of a majority of the affected farmers with the inundated fields being drained out through various means and the flattened crop being lifted again.

Accompanied by experts and field officials, they visited Dakha, Bhanohar, Raikot, Rajoana Kalan and Rajoana Khurd villages, from where the maximum loss was reported till Sunday.

Earlier, the widespread medium to heavy rain coupled with strong winds between September 22 and 24 had caused damaged to ready-to-harvest paddy crop in most parts of the district. “Waterlogging was reported in 12 to 15 per cent of the total crop area while flattening was spotted in 3 to 5 per cent, which could have reduced the yield by 2 to 3 per cent. However, the sunny days have turned out to be a saviour with the possible losses now seeming near negligible,” the CAO said, adding that 7 to 10 per cent area under the fodder crop and cultivation of various vegetables was also affected by the rain fury till Sunday and had started reviving on Monday.

Meanwhile, farmers, under the banner of the Bharti Kisan Union-Kadian, today demanded a special girdawari to assess the crop loss due to rains.

The farmers submitted a memorandum in this regard to the Samrala SDM, who forwarded it to the Deputy Commissioner for further necessary action.

Ludhiana, which has grown paddy over 2,58,600 hectares this season, the highest-ever in the state, had recently reported that paddy on over 3,500 hectares, which accounts for 1.35 per cent of the total area under the crop, hit by the dwarf disease.