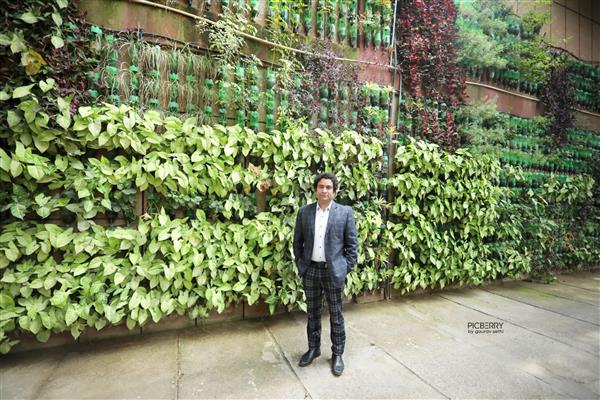 Additional Commissioner of Income Tax Department Rohit Mehra at a site of a vertical garden developed by him. PTI Photo

He is a taxman who keeps a hawk eye on tax evaders to protect government revenue. But at the same time, he has a passion to save the environment by increasing green cover with urban forests and vertical gardens.

“It is my passion to grow plants for increasing green cover. It is my service to the environment,” says Mehra, a 2004-batch Indian Revenue Services (IRS) officer.

His journey commenced about five years ago when his son's school declared a holiday because of bad air quality caused by smog.

“I thought at that time that I could not ensure clean air for my children. It triggered me to do something for the environment,” says Mehra while recalling this November 2017 incident.

“In life, you always have two options, either to react to any situation or you go and change the situation by taking action, however small that may be. I started taking small actions to change that,” says Mehra.

The Mehra family was living in Ludhiana at that time.

“We can remain healthy only if we have a clean environment around us,” Mehra told PTI.

Mehra initially started with setting up vertical gardens and the first such one was set up at the Income Tax office in Ludhiana.

“We have already set up more than 700 vertical gardens at many places, including the Tihar jail, railway stations, police stations, schools, colleges, government buildings,” says Mehra.

So far, 70 tonnes of waste plastic has been used in growing vertical gardens, he adds.

Besides vertical gardens, Mehra has grown 250 urban forests over different land sizes with a focus on planting only native species.

Mehra along with a team of volunteers converted several dump yards into mini-jungles. Besides, the urban forests were created in industrial areas, over panchayat lands and near canals, he adds.

“Recently, we have grown mini-jungles over eight acres at Dhianpur village in Batala and over two acres in Amritsar,” says Mehra.

“Some of the trees in urban forest grown a year ago gained height of 15 feet and it is even difficult to pass through them,” adds Mehra.

“This is because, we follow 'Vriksha Ayurveda' (ancient Indian science of plantation) technique whereby we plant a minimum of 25-30 native varieties like neem, kikar and amla, which complement each other as they share nutrients among themselves,” he elaborates.

“We use cow dung, stubble, leaves, etc., after digging the soil,” he says.

Mehra is also running a one-of-its-kind hospital for trees and plants at Amritsar with the support of some botanists and environmentalists. A tree ambulance is also stationed there.

“If somebody's plant is decaying, and after being contacted, we suggest remedies,” says Mehra.

“If one is in Amritsar, having some issue with a plant, then we also send an ambulance to the home to protect the same,” says Mehra.

“We get 25-30 calls every day for treatment of plants,” says Mehra who plays a dual role of an Income Tax officer and of an environmentalist.

“We also have a mobile tree ATM through which we give two free plants to those who promise to take care of it,” says Mehra.

Amritsar born Mehra has also written three books-”Gift Lungs to Future Generation”, “How to Make Urban Forests” and “31 Green Habits to Save the Planet”.

Calling his efforts of giving back to mother earth as a “divine experience”, Mehra says his wife and children also assist him in his green mission.

Mehra says he is also called for sharing his knowledge at the Lal Bahadur Shastri National Academy of Administration, Mussoorie, IITs, IIMs and AYUSH Department.