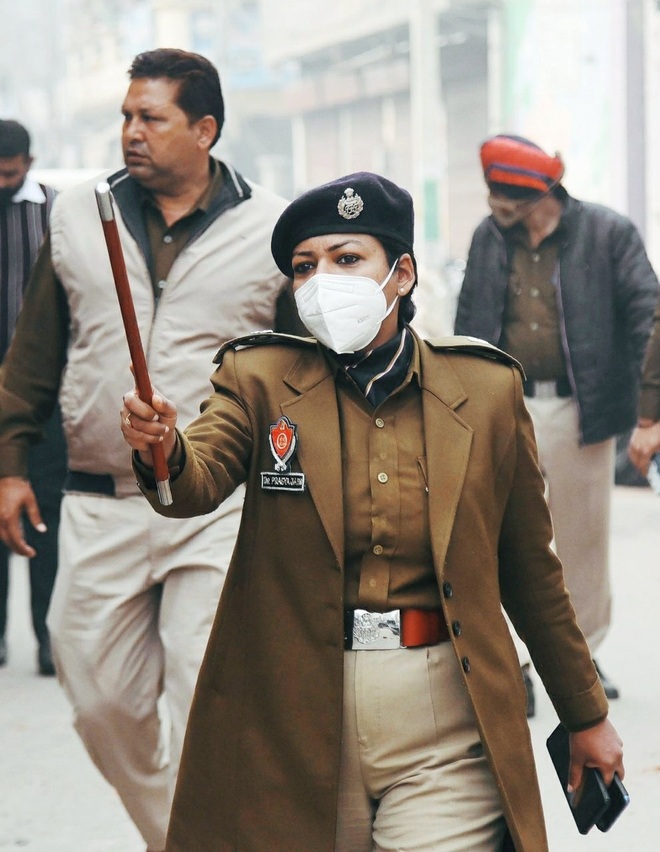 ADCP Dr Pragya Jain leads a police team to control a mob after the rumour of the child’s death.

In a rare display of humane face of the police and moving beyond the call of duty, a woman IPS officer turned mother of a minor rape victim here recently.

After the mother of the special child, suffering from Down’s Syndrome, abandoned her at the hospital, the ADCP, Dr Pragya Jain, stayed with her to take care of her meals, medicines and other requirements, besides providing her counselling and moral support.

The case had hit the headlines last week after the police had cracked it within hours with the arrest of the victim’s teenaged brother as the main accused. However, not believing the police theory, the victim’s family members and their neighbours had resorted to protest and even went to the extent of pelting stones and attacking the cops on duty, alleging that the minor boy was “falsely implicated”.

It was on February 10 that the seven-year-old girl was taken to a local hospital by her mother, alleging that she had been raped at a school, where she was a kindergarten student.

However, when the police sought the details of the incident from her, the victim’s mother disappeared from the hospital and left her daughter to fend for herself.

“Since the child was in acute pain and feeling alone, I could not hold myself from staying back with her at the hospital to render my services beyond the call of my duty,” the 2017-batch IPS officer told The Tribune here today.

A native of Baraut in Uttar Pradesh, the ADCP, Special Branch and Community Affairs, here, who is also holds a dgree in the bachelor of homoeopathic medicine and surgery, remained awake throughout the first night when the rape survivor could not sleep in the hospital.

Having run her own clinic in Delhi for seven years before cracking the UPSC exam in 2016, Dr Jain provided meals, medicines, other requisites and facilities, besides moral support to the special child during her stay in the hospital.

The Ludhiana Commissionerate Police, led by the Commissioner of Police Rakesh Agrawal, also arranged counselling by availing the services of the child protection officer to bring the rape survivor out of the trauma and agony through which she was passing through.

Though the victim’s mother initially alleged that the crime took place at the school, the police investigations laid hands on the CCTV cameras installed on the way to and fro the family’s home and school.

After scanning a number of CCTV footages recovered on the narrow lanes of the route, the police nailed the lie of the victim’s mother when a footage showed the girl coming hale and hearty from school to her home with her mother on the day of the incident. However, another video clip captured from the CCTVs revealed that the woman was carrying the child in her lap from home to hospital after the incident.

Taking a cue from the clinching evidence in hand, the investigation officers interacted with the minor child about the incident and her statement corroborated the police theory.

No sooner had the police registered the case and took into custody the victim’s teenaged brother, than the family and their acquaintances resorted to protest by blocking vehicular traffic.

As the police continued to take care of the rape survivor abandoned by her family at the hospital, a rumour was spread about the child’s death, which turned the protesters violent.

If her humanitarian services to the rape survivor were not enough, the ADCP, on hearing the violent protest, led a police team to pacify the protesters by telling them that the child was recovering well and was being given best possible medical aid and services at the hospital.

“Not ready to listen, the mob started pelting stones at our team. As the bystanders, including women and children, were at risk, we saved them at a great risk to our own safety,” revealed Dr Jain, who headed the operation to control the mob.

“As per the CP’s directions, care of the victim is our topmost concern. We ensured the child protection officer was involved since the moment she started receiving medical aid. Considering the special status of the kid, suffering from Down’s Syndrome, she was provided counselling and best possible facilities,” the ADCP added.

To further allay the apprehensions of the family and ensure fair investigation, the Commissioner of Police has formed a three-member special investigation team (SIT), comprising JCP City Deepak Pareek and ADCPs Dr Pragya Jain and Rupinder Kaur Sra. Agrawal has directed the SIT to thoroughly investigate the matter and submit its report at the earliest.

Taking cognisance of the matter, the Punjab State Commission for Protection of Child Rights Chairman Rajinder Singh also met the victim recently and directed the police to give her custody to the family. He also directed the district administration to arrange the compensation to the victim through the District Legal Services Authority (DLSA) at the earliest.

After the special child was left abandoned by her mother at hospital, ADCP Dr Pragya Jain takes care of her meals, medicines, counselling etc

If her humanitarian services to the rape survivor were not enough, the ADCP, on hearing about a violent protest, led a police team to pacify the protesters by telling them that the child was recovering well and was being given best possible medical aid and services at the hospital. Not ready to listen, the mob started pelting stones at the team. As the bystanders, including women and children, were at risk, the police team saved them at a great risk to its own safety.