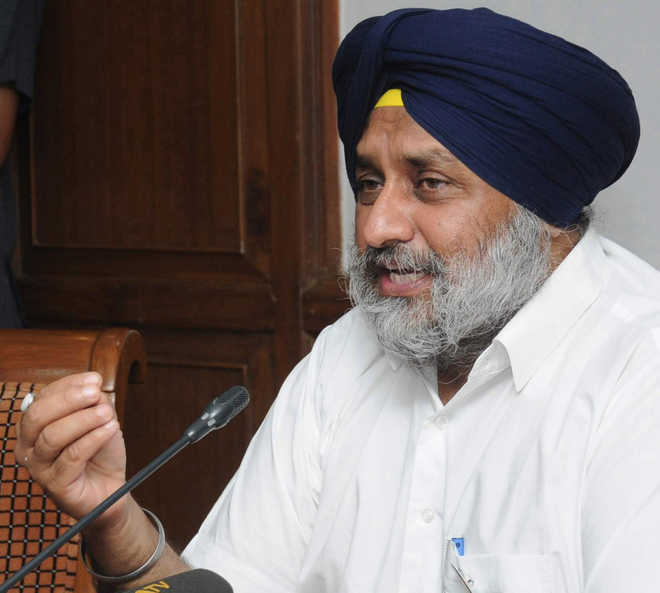 The Shiromani Akali Dal (SAD) today said the recurrence and frequency of the “most painful acts of sacrilege” clearly point towards a deep-rooted conspiracy.

Addressing gatherings in favour of SAD candidate Jeet Mohinder Singh Sidhu here and later in favour of Prem Kumar Arora in Mansa, party president Sukhbir Singh Badal called upon the Centre and the state government “to demonstrate sincerity and sense of urgency in their conduct and actions to identify, expose and punish those behind this conspiracy. Their attitude so far has left much to be desired.”

The Centre and the state government should identify, expose and punish those behind the unpardonable acts of sacrilege. Sukhbir Singh Badal, SAD president

Sukhbir said those carrying out these unpardonable deeds had been emboldened as the Congress leadership and government in Punjab had wasted nearly five years in playing dirty and dangerous politics over the most sensitive issue of sacrilege.

Meanwhile, he said the SAD-BSP combine would construct a 500-bed medical college and hospital in Mansa. He said all irrigation-related problems at tailends of canals would be solved by construction of underground water pipes. He also announced that all farmers who did not have a tubewell connection would be given one on a priority basis.

He also promised an insurance cover of Rs 50,000 per acre to farmers for their crops. He said the old pension scheme, which was ended in 2004, would be revived, sand and liquor mafia would be wiped out, the electricity bills of religious places would be waived and villages having Muslim and Christian population would be provided with land for graveyards. He also announced traders would be given life and medical cover and fire insurance cover of Rs 10 lakh each.