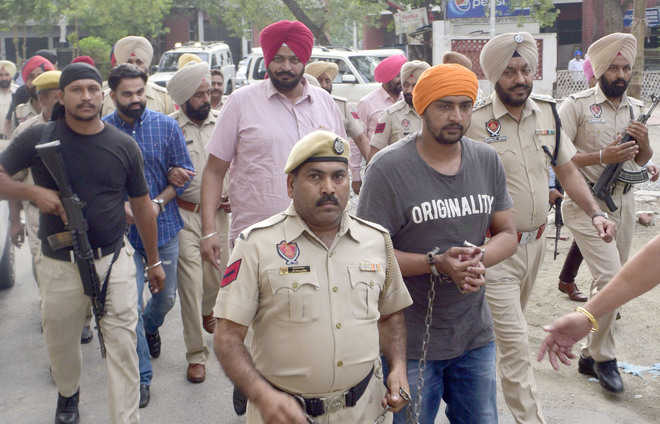 Claiming that he was being made a scapegoat following political rivalry between former Akali Minister Bikram Singh Majithia and Punjab Jails Minister Sukhjinder Singh Randhawa, gangsters Jaggu Bhagwanpuria on Wednesday moved the Punjab and Haryana High Court maintaining he was nobody’s man and expressed apprehension of being killed in a fake encounter or in the prison.

Lodged in Patiala Central Jail, Bhagwanpuria is seeking his transfer to Amritsar jail, where a majority of cases lodged against him are pending. As his petition filed through counsel Pradeep Virk came up for hearing before Justice Harnaresh Singh Gill, the State counsel appeared before the Bench with assurance of filing a reply to the contentions raised in the plea.

Virk contented on Bhagwanpuria’s behalf that the petitioner was not linked to any political party and was merely being used for the “realisation of political motives of certain individuals”. Elaborating, Virk submitted that Majithia was trying to get an FIR registered against Randhawa in the murder case of Gurdaspur district Shiromani Akali Dal (SAD) vice-president Dalbir Singh Dhilwan. In the process, the petitioner was being portrayed Randhawa’s henchman. The petitioner has also been accused of issuing death threats to Majithia as a part of the “malicious propaganda”.

Randhawa, on the other hand, has been leveling allegations that petitioner has been working for long under the clout of Akali Dal leaders with 44 cases being registered against him, of which 29 were lodged in Majithia's constituency Amritsar (Rural). He had further alleged that the petitioner’s brother managed to flee the country under the previous SAD-BJP regime.

Virk added the petitioner was also apprehending danger to his life and liberty by certain Punjab Police officials, who for some reasons and political gains were trying to threaten him. “Not only this, various endeavors are being made by certain jail officials to kill the petitioner by staging a false encounter as he was given an opportunity to scale the wall of the Patiala Jail so that it could be shown that the petitioner was trying to flee from jail and was thus consequently killed”.

Besides, the security cover provided to the petitioner during transit from Patiala Central Jail to Amritsar Sessions Court had suddenly been reduced. He was also being constantly harassed and brutally beaten by the police and jail officials in utter violation of his fundamental rights of protection against custodial torture guaranteed under Article 21 of the Constitution of India.

Virk added the petitioner could also be indicted fallaciously in cases, including ones under the NDPS and Arms Acts, heavy recovery could be planted upon him or he could be subjected to custodial torture.