After scoring goal against Germany in hockey bronze match, Hardik wants this logo imprinted on his car 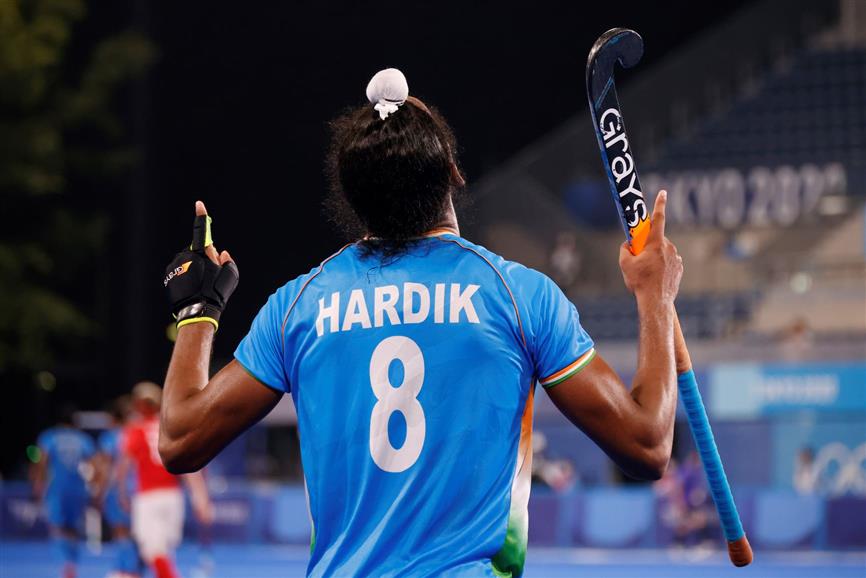 "I have got a gold ring made for my son in the shape of Olympic rings," says Hardik's mother. Reuters

Mithapur village in Jalandhar, which has three players in the Indian hockey men's team, erupted in celebrations after India won bronze at the Tokyo Olympics on Thursday.

The captain of the team, Manpreet, too hails from the village.

Two days ago, Manpreet's mother Manjit Kaur, while talking to The Tribune, had said that the team shouldn't take Germany lightly, but her joy knew no bounds after India's sensational victory.

"I will hold 'Akhand Sahib path' now. We will celebrate to the fullest. I have no words to express my happiness," she said, tears of joy flowing onto her cheeks.

She said when her son in childhood would devote most of his time to hockey, she kept wondering what Manpreet would do once he grew up.

"But those training him then would always tell me that from the village playground, my son will move to international venues and I will watch him play hockey on TV some day. The day is here and I watched him win an Olympic medal. What else could I have asked for!"

Hardik Singh, another star player who scored a goal against Germany, phoned his brother after the match, asking him to imprint Olympic logo on his car.

"When he got selected for the Olympics, his younger brother asked him if he could get Olympics ring imprinted on the car. Hardik replied he will tell him at an appropriate time. The time has come," said an elated mother of Hardik, who belongs to Jalandhar.

"I have got a gold ring made for my son in the shape of Olympic rings," she said, adding their prayers had come true.

Also, huge rush of camerapersons was present at Varun's house. He too belongs to Mithapur village. As video bytes of Varun's father were being recorded and interviews were being taken, old struggle days came as a quick flashback in his mind.

"I am celebrating with mediapersons. There is a dhol, and we are dancing.  I had never expected such a day in my life. I have seen Varun doing hardwork day and night. Today the hardwork has paid off. On this big day, I suddenly got a flashback of every struggle and pain I have gone through in life," Brahma Nand, Varun's father said.

Brahma Nand was a truck driver and because of financial constraints, he had to see a lot of problems in his life.

"I am the luckiest one today. My son has made India happy, is there are other feeling that can beat this one?," The father asked.

Having a calm demeanour, Brahma Nand said that he thanked the almighty and asked him to keep his blessings on the boys forever.

He said that now he wishes the players to win a gold in Commonwealth games in 2022.