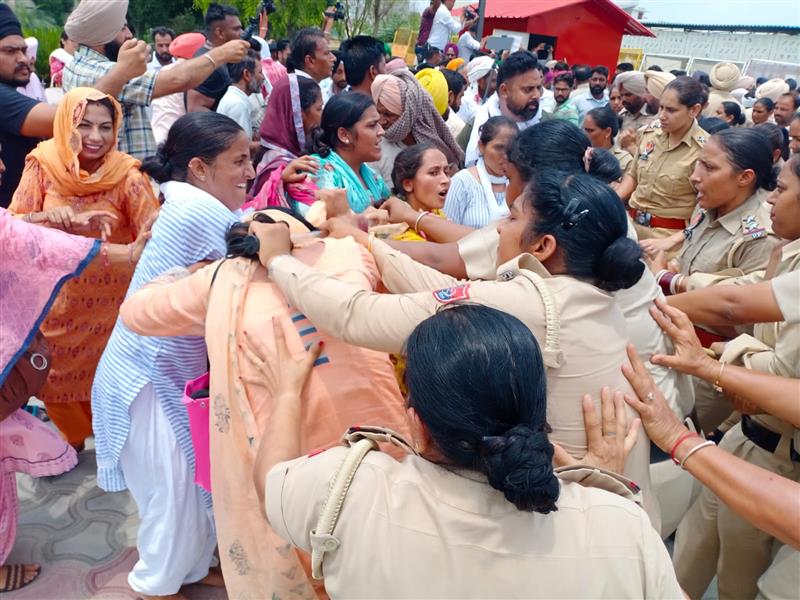 The police try to stop protesting teachers from marching ahead.

Members of the Unemployed PTI 646 Teachers’ Union and the police personnel suffered injuries near the residence of Chief Minister Bhagwant Mann today.

The police had to use water cannons as the protesters allegedly tried to set themselves on fire. They accused cops of using batons. Four agitators and two women constables suffered injuries in the melee.

“We tried to head towards the Chief Minister’s residence. We did not attack the police personnel, but the latter resorted to baton charge. Cops did not spare even women members. Four members of the union have suffered injuries and are undergoing treatment,” said Rajpal Singh of the union.

The protesters alleged that during the Assembly poll—Simpy Sharma, Gagan and Iqbal Singh— were agitating atop a water tank in Mohali. Senior AAP leaders had assured to fulfil their demands after the formation of their government, said the agitators.

Sangrur Rural DSP Ajaypal Singh said we stopped the protesters from going near the CM house. “They pushed cops and two women constables suffered injuries. We used water cannons after some protesters tried to set themselves on fire,” said the DSP.