Kabaddi a hit among rural youth 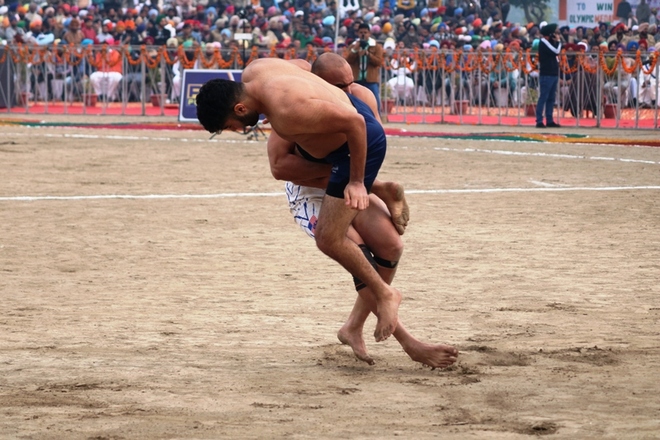 Players in action in the International Kabaddi Cup final match.

The curtain came down on the International Kabaddi Cup at the jam-packed Shaheed Bhagat Singh stadium with drug rehabilitation experts saying that the concept of village-level tournaments, started across the length and breadth of Dera Baba Nanak, had brought down the use of drugs in this border area.

Organisers had brought a dozen buses and had parked them on the sidelines. Spectators climbed on the roof tops to watch the proceedings. Experts claimed that ever since the grassroots level matches were introduced about two years ago, the incidence of drug use had come down to a great extent.

“The results are positive. Kabaddi is now weaning away youngsters from opium and poppy husk,” said Romesh Mahajan, Director of the Gurdaspur Red Cross rehabilitation centre.

So much so, Dera Baba Nanak and its adjoining villages sent 12 players out of a total of 14 in the Gurdaspur team that won the Punjab school championship recently.

Cabinet minister and Dera Baba Nanak MLA Sukhjinder Singh Randhawa said in November 2017, he had convened a meeting of educationists, doctors of the Batala and Dera Baba Nanak Civil Hospitals and rehabilitation experts at his Dharowali village residence. “The problem (drug menace) was discussed threadbare and we arrived at certain conclusions,” he said.

“The consensus that emerged was that people will shun drugs only if they remain busy. Employment opportunities were negligible because most of the industrialists I spoke to refused to set up factories citing ‘border area exigencies’. Then we struck on the idea of starting mini-tournaments to ensure youth got an activity to indulge in. That was when the seed was sown. We opted for kabaddi as it is an affordable game. After becoming a minister, I even started giving grants from my discretionary funds. As you sow, so shall you reap. Now, see the results. The area may not be totally drug-free but, according to doctors, the number of youngsters coming to their de-addiction centres has decreased considerably,” claimed Randhawa.