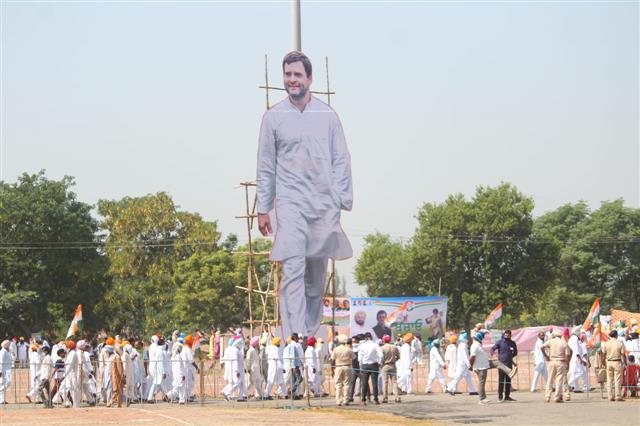 Congress leader Rahul Gandhi on Sunday launched a scathing attack on Prime Minister Narendra Modi and claimed that he was a "puppet of Ambani and Adani" at the 'Kheti Bachao Yatra' in Badhni Kalan in Punjab's Moga district.

Gandhi said India was not ruled by Modi as the government was being run by "Ambani and Adani".

Gandhi said that Modi was aided by the billionaires through the media, who give him 24-hour coverage.

"It's a very simple relationship, Narendra Modiji gives them land, in turn they give him full support through the media," he said.

Gandhi hit out at the Centre on Sunday over the three new agriculture laws, asking why were the farmers agitating if these were meant for them.

Gandhi asserted that the contentious Acts would be revoked if the Congress was voted to power. He wondered what was the "hurry" and need to implement these legislations amid the coronavirus pandemic.

"And if farmers are happy with these laws, then why are they agitating across the country? Why is every farmer of Punjab agitating?"

Farmers have expressed apprehension that the Centre's farm reforms would pave the way for dismantling of the minimum support price system, leaving them at the "mercy" of big companies.

He also said that the Prime Minister had been lying since the past six years.

"India used to borrow from across the world to feed its people till the time Punjabi farmers took the charge of feeding them," he added.

Singh said that the people of Punjab have initiated a "war" against the union government to protect the rights of the farmers.

"Punjabis comprise just 2 per cent of the population but they feed 50 per cent of the country. I don't know why the NDA government has brought these new legislations, which were not in the interest of farmers,"he added.

Singh said he feared that the MSP will be taken back by the Union government in the coming years and farmers needed to unite for the common cause.

He lashed out at the Akali Dal, claiming that former union minister Harsimrat Badal gave her nod to the controversial Bills in a Cabinet meeting.

"The people should not rely upon the Akali leadership. They were were now shedding crocodile tears," he added.

"Punjab needed Green Revolution...India needed Green revolution. Punjab's farmers provided grains to the entire country. By giving Punjab less MSP, 80,000 crore people were fed. But today the government is trying to kill the farmer and his income," he said.

The leaders were speaking at Congress' 'Kheti Bachao Yatra' on Sunday to protest against the contentious farm laws.

Singh, state Congress president Sunil Jakhar, Congress' Punjab in-charge Harish Rawat, and all state ministers and party MLAs will join the protests, “to give voice to the angst and pain of the farmers, whose livelihood and future has been put at stake by the central legislations”.

A spokesperson of Punjab Congress had said on Thursday that the tractor rallies were expected to be supported by farmers’ organisations and will cover more than 50 km over three days.

The rallies will be conducted amid strict COVID-19 protocols, the spokesperson had said.

Gandhi is likely to address rallies at Kaithal and Pipli in Kurukshetra district of Haryana on October 6 instead of October 5, following which he will return to Delhi.

Farmers have expressed apprehension that the Centre’s farm reforms would pave a way for the dismantling of the minimum support price system, leaving them at the “mercy” of big companies.

Parliament had last week passed the Essential Commodities (Amendment) Bill, 2020; the Farmers’ Produce Trade and Commerce (Promotion and Facilitation) Bill; and the Farmers’ (Empowerment and Protection) Agreement of Price Assurance and Farm Services Bill. — with PTI