Polling held for over 100 civic bodies in Punjab; skirmishes at some places : The Tribune India

Polling held for over 100 civic bodies in Punjab; skirmishes at some places

Former senior vice president of Muktsar municipal council Yadwinder Singh Yadu, a Congress candidate from Ward 4, and his supporter Sudhir Sharma, injured in a late night clash between the Akalis and the Congressmen 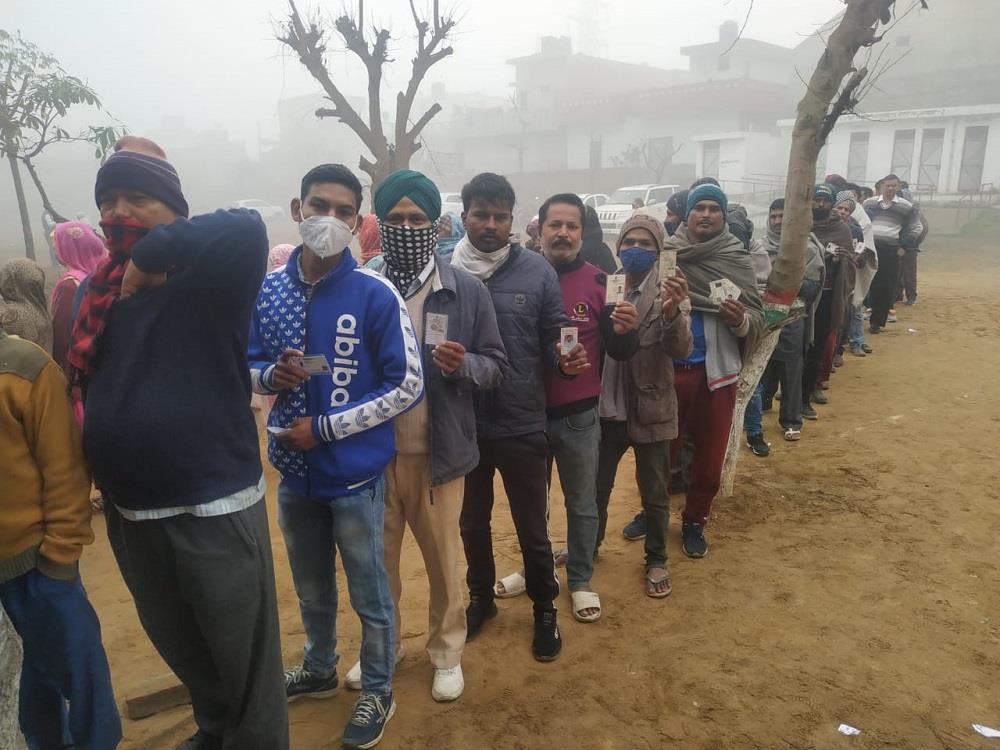 People wait in line to vote in the Punjab civic body polls in Jalandhar on Sunday. Tribune Photo: Malkiat Singh

Polling was held for over hundred civic bodies in Punjab on Sunday amid stray incidents of skirmishes at some places.

According to officials, seven people were injured in Rupnagar after workers of the ruling Congress and the Shiromani Akali Dal clashed following a heated argument in Ward No.1 there.

Skirmishes and scuffles between activists of the Congress and the Opposition parties were also reported from Batala, Rajpura, Tarn Taran, Bathinda, Gurdaspur, Samana, Rupnagar, Nabha, Nangal, Mohali and Ferozepur.

Though the final voting percentage is yet to come, over 55 per cent people had voted till 2 pm. The voting began at 8 am and continued till 4 pm, said officials.

A total of 9,222 candidates are in the fray for the elections to 2,302 wards of eight municipal corporations of Abohar, Bathinda Batala, Kapurthala, Mohali, Hoshiarpur, Pathankot and Moga, 109 municipal councils and nagar panchayats.

The Opposition Aam Aadmi Party (AAP) accused the Congress workers of indulging in booth capturing in Samana, Rajpura, Dhuri, Abohar and Bhikhiwind, a charge denied by the ruling party.

Leader of Opposition in the Punjab Assembly Harpal Singh Cheema claimed that an AAP volunteer was allegedly shot at in Patti by some Congress activists. However, police rejected the charge.

Cheema alleged that the democracy was "murdered" in Punjab on Sunday by the Congress and sought resignation of Chief Minister Amarinder Singh.

Talking to the media in Majitha, SAD leader Bikram Singh Majithia accused the ruling Congress of “misusing” the government machinery to win the polls.

The State Election Commission (SEC) had set up 4,102 polling stations, of which 1,708 were declared as sensitive and 861 as hypersensitive.

Around 7,000 electronic voting machines (EVMs) were used for voting.

As many as 19,000 police personnel were deployed to ensure free and fair elections, an official said.

Voters were also screened with thermal scanners at polling booths in the wake of the COVID-19 pandemic.

Polling began on a violent note in Muktsar when former senior vice president of Muktsar municipal council Yadwinder Singh Yadu, a Congress candidate from Ward 4, and his supporter Sudhir Sharma, were injured in a late night clash between the Akalis and the Congressmen at Kotkapura Road, on the outskirts of Muktsar.

Violence was also reported from Ropar, where a clash between SAD and Congress workers led to nine people being wounded, some with serious injuries.

Minor skirmishes and heated exchanges were also reported between workers of the ruling Congress and the opposition parties at Jagraon, Batala, Rajpura, Tarn Taran and Bathinda.

He further charged the Congress-led government of not carrying out any development work during its regime.

Voters including elderly citizens started coming to the polling booths in the morning at many places in Punjab to cast their votes.

Voters were also screened through thermal scanners at polling booths in the wake of the COVID-19 pandemic.

Congress leader and former MLA Muktsar Karan Kaur Brar blamed Akalis for the violence, and has raised questions on the functioning of the police in the town.

Polling under way for civic body elections in Punjab

Karan Kaur Brar said: “In our government, the Akalis are assaulting the Congressmen. It is a complete failure of duty on the of part of the SSP and the district police.”

Activists of the Akali Dal held a sit-in protest in Sultanpur Lodhi over allegations of fake votes at booth no. 1 of BDPO office. Firing in the air and stone pelting were also reported.

Nine people were wounded—a few seriously—in a clash in Ropar. The clash followed a heated argument between supporters of Congress and the Shiromani Akali Dal, who accused each other of trying to bribe voters in the ongoing civic body elections.

Minor skirmishes reported in Tarn Taran, and in Guru Harsahai in Batala. Minor clash between Congress workers and the AAP workers in ward no. 7 reported. There are tight security arrangements in both towns.

Meanwhile, the police took a SAD candidate and his son into custody over the allegations of kidnapping a Congressman.

On this, SAD’s Muktsar district president-cum-local MLA Kanwarjit Singh Rozy Barkandi said: “Yadu has been beaten up by police and not by any SAD worker. The police have also arrested Chand Batra — our candidate from Ward-18 Tek — and his son over false allegations of kidnapping. We are winning the election in a majority of wards and wanted a peaceful election.”

Gidderbaha Congress MLA Amarinder Singh Raja Warring visited the injured Congressmen at a private hospital here. He said: “It is shameful that Congressmen are being assaulted in the constituency where the party is in power. I ask Sukhbir Badal to come here and see for himself that who is indulged in violence — his men or the Congress party workers.”