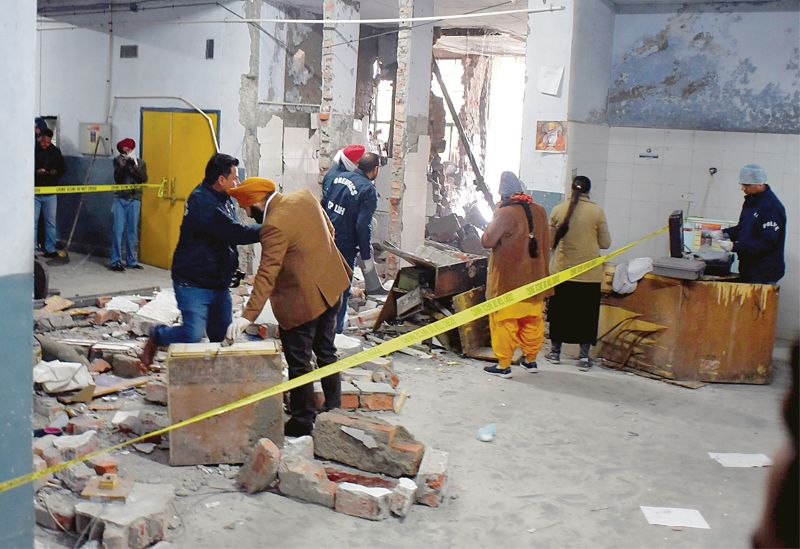 A high-intensity explosion at Ludhiana district court complex in December 2021 had left one person dead and six injured. Tribune File

The Special Task Force has initiated a process to issue a red corner notice against Harpreet Singh Malaysia, wanted in a case related to smuggling of IEDs from Pakistan through drones. One of the smuggled IEDs was used in the Ludhiana court blast in December 2021.

According to the police, Harpreet played a vital role in establishing links between anti-social elements in India and Pakistan, including Khalistan terrorist Harvinder Singh Rinda.

In January, Harpreet’s cousin Surmukh Singh was arrested by the STF for smuggling drugs and IEDs from Pakistan. His interrogation had led to the seizure of two more IEDs. Harpreet had helped Surmukh in establishing contacts with Pakistan-based separatist forces, including Rinda, the probe had revealed.

Surmukh’s role in the Ludhiana court blast case had come to the fore when the STF nabbed four persons, including a juvenile, while busting a cross-border drugs and arms smuggling racket.

Those arrested included Sawinder Singh, Harpreet Singh, Dilbagh Singh and a minor boy. During interrogation, Dilbagh had revealed about the IED used in the Ludhiana court blast.

Along with Harpreet, the STF has also started a process to issue a red corner against Italy-based Simranjit Singh Sandhu and Tanvir Singh Bedi, who reportedly resides in Australia. They were the prime suspects in a case related to the confiscation of around 200 kg of heroin and other narcotic substances from a house in Akash Vihar at Sultanwind village in August 2020.

The house allegedly belonged to former SAD leader Anwar Masih, who was later arrested in the case. The STF had nabbed prime suspects Ankush Kapoor and an Afghan national, Arman Basharmal, in the case. Besides the STF, the National Investigating Agency and the Enforcement Directorate also probed the case.

It has been alleged that Bedi and Sandhu had links with peddlers in Pakistan, Afghanistan and Dubai. They were making payments through hawala.

“The process to issue a red corner notice is in the final stage. It will be forwarded to the Ministry of Home Affairs soon,” said Rashpal Singh, AIG, Special Task Force.