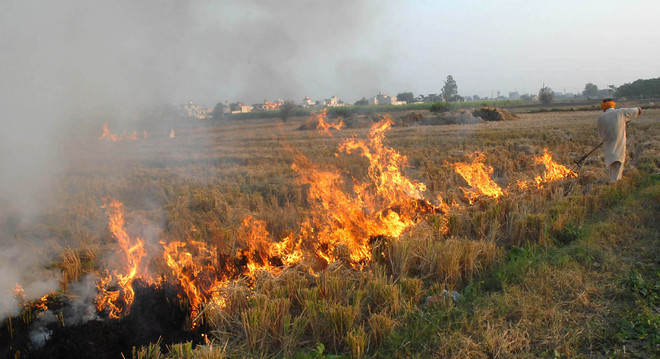 A farmer burns stubble on the Jalandhar-Nawanshahr road near Phagwara. Malkiat Singh

A total of 245 stubble burning cases have been reported from nine Malwa districts of the state so far.

PPCB officials said the harvest started early in the Majha region so a significant number of farm fire cases have been reported from there. Amritsar has recorded the highest 857 farm fire cases, followed by Tarn Taran (366) and Gurdaspur (95).

Agricultural experts said the harvest was yet to gather pace in Malwa. If authorities don’t act timely, farm fires would increase at a rapid rate in the coming weeks.

“We, especially the marginal farmers, have no alternative but to burn paddy straw. On the one hand, the government promises compensation to farmers not burning stubble and when they act by pooling in resources by taking loans, it doesn’t honour it’s own word,” said BKU (Ekta Ugrahan) president Shingara Singh Mann said.