The commission has ordered the government to file a report 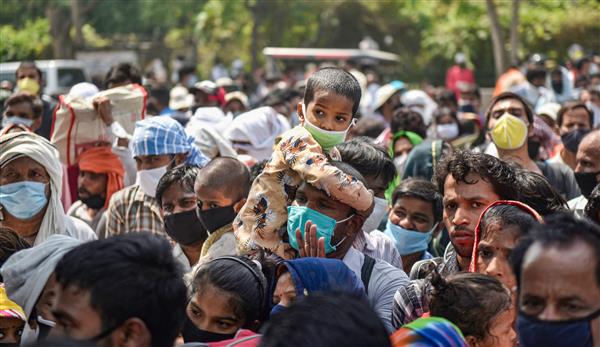 Some of the migrants had blamed the police of beating them up. PTI

Days after the protest by migrants in Ludhiana, the Punjab State Human Rights Commission has taken suo moto cognizance of the matter.

The commission has ordered the government to file a report.

Notably, hundreds of migrants had come on the road at Vishwakarma Colony near Jamalpur of Ludhiana on May 14 to mark their protest against the government authorities for allegedly not making required arrangements to send them to their home state Bihar.

Some of the migrants had blamed the police of beating them up.

The migrants were demanding from the government to send them Bihar at the earliest.

On the other hand, the police had denied the allegations.

The SHO of Moti Nagar police station, Varunjit Singh had stated that the police had not conducted lathi-charge on any migrant.

He had claimed that they are investigating the matter to know that who ‘misguided’ the migrants to gather there.

Now, the Commission has perused the news-item published in The Tribune, on 15.05.2020, under the caption “Migrants Protests in Ludhiana”.

“The Commission takes suo moto cognizance of the matter and calls for a report from the State Government in the Home Department, through, the Commissioner of Police, Ludhiana, before the next date of hearing. A copy of the order, along with a copy of the complaint be sent to the DGP, Punjab; DGP, Human Rights, Punjab, Chandigarh and the Commissioner of Police, Ludhiana, for compliance”, according to the order issued by Chairperson Justice Iqbal Ahmed Ansari.