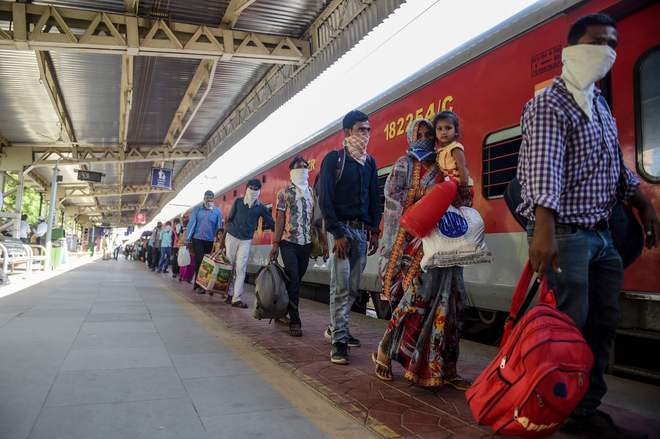 Just about a month after hundreds of migrants walked from one district to another and later managed to get a train to their native places in Bihar and Uttar Pradesh, many of them have returned to Punjab. The remaining too are eager to come back as they are finding it difficult to sustain their families in the absence of work.

Pritpal, a hosiery worker who had covered 100 km on foot to board a train to his native village in Uttar Pradesh, says: “I cannot let my children sleep on empty stomach. If I don’t work, we will die of hunger. I failed to find any work in Uttar Pradesh, so I returned. I am not scared of getting infected with Covid-19, but seeing my kids crying due to hunger is a nightmare.”

Salim Mohammed, who works in horticulture fields at Patran village, says most residents of his village in Bihar are banking on the Mahatma Gandhi National Rural Employment Guarantee Act (MGNREGA) for work. “My children were not getting proper food. So I decided to return. My average earning here is Rs 13,000 a month while lodging and boarding is free,” says Mohammed, who has worked in Punjab for over 18 years, but left in May only to return last week.

Chhote Lal, who works in a plywood unit in Patiala, says: “Back home, there was no work and no money to meet even our daily needs. We called our employer here who offered us work. We thus decided to come back.”

Meanwhile, the reverse migration has brought cheer to farmers, industrialists and construction contractors as their work was hit badly due to the mass exodus.

Nischint Kumar, the owner of a hosiery in Ludhiana, says: “Finally, I have workers back in the mill. It is a great relief as it is our peak production season and we still have some time to meet the targets.”