Will be showcased in farmers' R-Day march 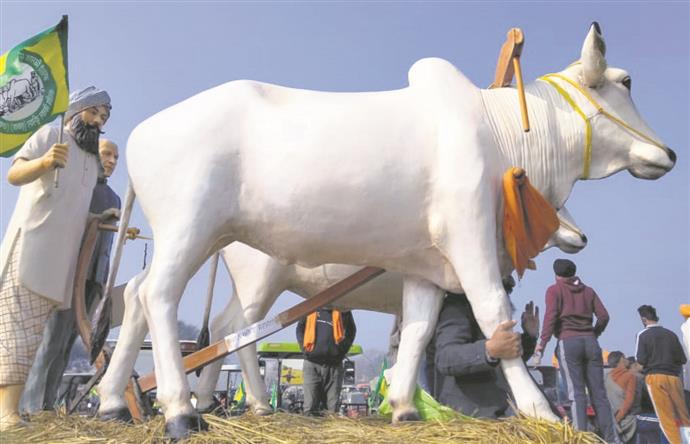 A tableau, depicting bullocks ploughing a field, on a tractor during a rehearsal for the Republic Day march in Moga. Tribune photo

Ahead of the proposed tractor march on Republic Day, hundreds of farmers took out a tractor march in villages of Moga district on Thursday. The main attraction of the rally was a tableau depicting a farmer ploughing a field with a pair of bullocks.

The tableau also shows Dr MS Swaminathan, with one of his hands gently placed on the shoulder of the farmer and the other holding a copy of the National Commission on Farmers’ report, which was released by him, nearly 14 years ago.

The tableau is made of carbon fibre that also has gun metal, sandstone, cement, and plaster of paris making it a beautiful piece of art.

Known as the father of green revolution in the country, Dr Swaminathan submitted his report to the Centre to fix the MSP for crops after calculating the cost inputs and adding at least 50 per cent profit to it.

The protesting farmers in the tractor march urged the Centre to implement the Swaminathan report, repeal the controversial farm laws and continue with the government purchase of foodgrains in all states.

The tableau was crafted by famous artist Manjit Singh with the help of his brother Surjit Singh a few months ago. With farmers protesting against the controversial laws, the tableau is being taken to many places in Punjab and Haryana to instill confidence among the farmers to fight for their rights.

The art work, which has already drawn a considerable public attention, will also be showcased during the upcoming tractor rally in Delhi on Republic Day.