Newborn handed over to the family by Bathinda SSP 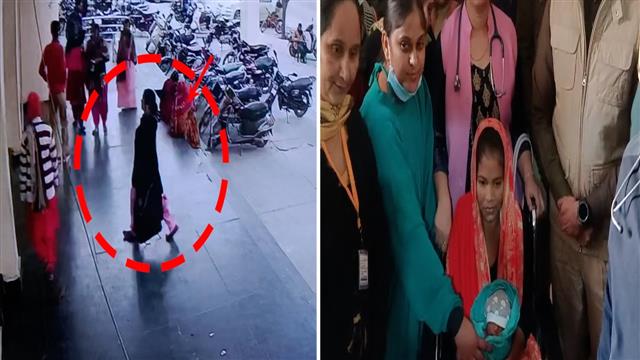 The women stealing the newborn from Bathinda hospital (Left) and child being handed over to mother. Tribune Video Grab

The Bathinda police have arrested a mother-daughter duo who stole a newborn child from the Women and Children Hospital two days back in Bathinda. The accused has been identified as Simarjit Kaur of Phide Khurd village in Faridkot and her mother Kulwinder Kaur of Kotheguru in Bathinda.

The preliminary investigation by the police revealed that Simarjit was living separately from her husband and in-laws and her child had died after delivery last month. She then planned to steal a child to show it to her in-laws.

Police have named three people, including mother and daughter in this case. At the same time, the child was handed over to the family by Bathinda SSP J Elanchezhian on Wednesday.

SSP J Elanchezhian said in preliminary investigation, it has come to light that Simarjit Kaur was married to Harjinder Singh of Phide Khurd village last year, but only after about five months of marriage, the couple had a fight. After this, Simarjit Kaur came back to her parents’ home.

Simarjit gave birth to a boy on November 2 in the civil hospital, but his health condition was not good. The newborn was referred to other hospital and died on the way, about which no one was informed. After this, Simarjit, her mother Kulwinder Kaur along with Jaswinder Singh of Maluka village and Jagsir Singh planned to steal a child.

The SSP said Simarjit knew the civil hospital very well and before stealing the boy, they conducted a recce. After stealing the child, the accused stayed in Bathinda for the night. Next day, they went to Kothaguru. The newborn was recovered from Jaswinder Singh's house in Maluka. As he was found suffering from cold, he has been admitted to Civil Hospital for treatment.

The SSP said several teams were formed by the police after the child was stolen and various nakas were set up. Meanwhile, Davinder Singh, head of Kothaguru's Satkar Committee, informed the police and the child was recovered.