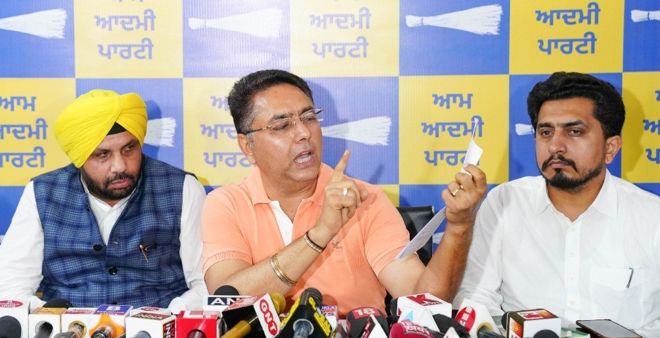 Minister Aman Arora talks to the media in Chandigarh on Wednesday.

The Aam Aadmi Party (AAP) came down heavily on the Congress and the BJP for “working in cahoots” to cancel the special session of the Punjab Vidhan Sabha called by the government on Thursday and termed it a murder of democracy.

Addressing a press conference here on behalf of the Cabinet, New and Renewable Energy Sources Minister Aman Arora bemoaned Governor Banwarilal Purohit’s decision of withdrawing his assent to hold the special session following three memoranda submitted by leaders of the Opposition and accused the Governor of “acting on the directions of the BJP, which had recently attempted to “topple” the AAP government in the state.

He was accompanied by PWD Minister Harbhajan Singh ETO and MLAs Jagdeep Kamboj and Dinesh Chadha.

Arora said the special session was called by the government on the recommendations of the Council of Ministers, “as per the Constitution”, to bring a “confidence motion” against the BJP’s attempt to topple the six-month-old AAP government.

However, “throwing all norms to the wind”, the Governor’s office cancelled the session, which was a “violation” of the Constitution.

Lambasting Leader of the Opposition and Congress leader Partap Singh Bajwa for raising an objection and writing to the Governor against the special session, Arora said Bajwa was working as the B-team of the BJP to halt the progress of AAP in Punjab.

“Bajwa is dancing to the tunes of the BJP to safeguard his Z+ security. He is not concerned about saving democracy at all,” Arora said. He said in the past