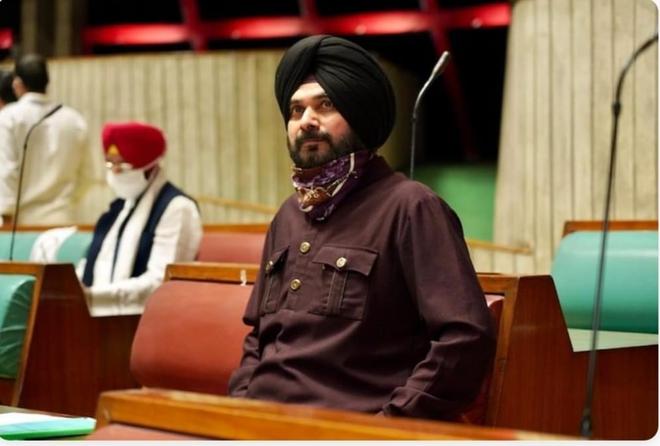 Ending his self-imposed exile, former Cabinet Minister and Amritsar East MLA Navjot Singh Singh today made an appearance on the opening day of a two-day special session of the Vidhan Sabha.

It is not about MSP of wheat and rice alone, there is no procurement model for other crops…. The state should act against the sand and liquor mafia to generate more revenue to give MSP on vegetables and cereals.-  Navjot Singh Sidhu, Congress

Before arriving at the Assembly, Sidhu, in a video on his YouTube channel ‘Jitega Punjab’, congratulated the state government on calling the session, but also cautioned that a lot more needed to be done to uplift the farmers.

Sidhu had been abstaining from the Assembly after he resigned from the Council of Ministers in 2019. He had recently made a public appearance at Rahul Gandhi’s tractor rally in Moga.

Supporting dark brown Pathani kurta and a black turban, the cricketer-turned-politician arrived at the Assembly along with Jalandhar Cantt MLA Pargat Singh. Sidhu immediately drew attention as he was greeted by most of the ministers and MLAs, with some even walking up to him to exchange pleasantries.

However, seated in a rear row, Sidhu did not exchange pleasantries with Chief Minister Capt Amarinder Singh and Cooperation Minister Sukhjinder Singh Randhawa.

In his conversation with some of the MLAs, he said ‘silence’ was his biggest weapon. He, however, preferred not to interact with mediapersons. In political circles, Sidhu’s presence in the Assembly is being seen as a positive sign for reconciliation between him and the Chief Minister. Some MLAs met Sidhu at the residence of Pargat Singh before the former left the place.

Sources close to Sidhu said he was fully prepared to be a part of the historic day when the Chief Minister is set to table a resolution rejecting the Central legislations. Punjab affairs in charge and AICC general secretary Harish Rawat is expected to reach the city tomorrow, to work further on rapprochement between the Chief Minister and Sidhu.