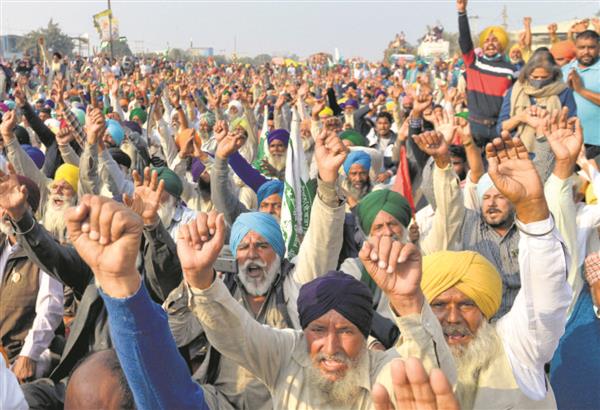 UP in arms: Farmers protest the Central agriculture laws at the Singhu border. Tribune photo

With the talks with the Centre remaining inconclusive, farm leaders have hardened their stand on the farm laws. They said their protest would instensify further with the joining of residents and various non-farming organisations along with more farmers from the state.

In Faridkot, the farm unions of the area have now started sending new batches to replace protesters stationed near the national capital.

Many farmers, who are participating in the protest for the past week, will return home to tend to their wheat crop and also take care of their family needs.

“So that our fight for a ‘decisive battle’ against the Union Government does not lose steam and also to take care of those who have already given one week of their time to the agitation, we are sending new batches of farmers from the rural area to Delhi,” said Binder Singh Golewala, district president, Bhartiya Kisan Union (Rajewal).

The leaders are organising meetings at village-level, calling upon farmers to reach Delhi as replacement for those who want to return home, said Sukhdev Singh, a leader of BKU (Krantikari).

While addressing a gathering of farmers at Golewala on Tuesday, the farmer leaders said those reaching Delhi need not carry ration with them as there was more than enough food stock with the teams, camping there.

“As it is going to be long-drawn fight, we need to prepare new batches of the protesters so that they take turns in participating in the dharna and there is no fall in the number of the protesting farmers,” said Binder Singh.