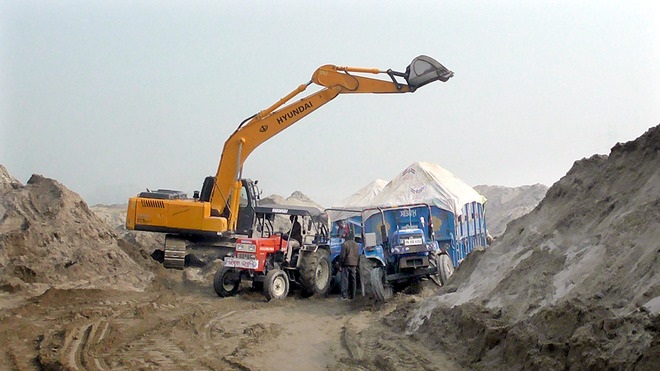 The construction of national and state highways, bridges and government buildings has come to a standstill due to an acute shortage of sand and gravel in the state.

With the mining operations in majority of the clusters still closed, there remains a huge gap in demand and supply.

The fact that the state government has imposed a new royalty of Rs 2 per cubic feet (plus surcharge) on the good earth, if it’s excavated for commercial use (building of basements, roads, highways and commercial buildings etc.) has also escalated the cost of construction, making it difficult for the National Highways Authority of India (NHAI) and the Public Works Department to continue with their projects.

The NHAI officials in a meeting with Chief Minister Bhagwant Mann today reportedly raised the issue of lack of material due to which they were forced to source it from neighbouring states and how the new royalty was escalating the construction cost of various national highways in the state.

Sources said the NHAI officials sought a waiver of royalty as it would escalate the cost of all their projects in Punjab by Rs 1,500 crore. Though the government officials reportedly said this could not be waived for one particular entity, the CM assured them that he would try and work out a solution.

It may be mentioned that many of the ongoing construction works undertaken by the PWD have also slowed down drastically in the wake of non-availability of sand and gravel.

PWD Minister Harbhajan Singh ETO said he was hopeful that the supply of sand and gravel would be restored soon and the projects would pick up pace.

Though the AAP government had amended the mining policy (the ongoing policy, introduced by the previous government, is in operation till February 2023) in August, of the seven mining clusters in the state, only three (Pathankot-Gurdasapur, Ludhiana-Nawanshahr and Ropar-Anandpur Sahib) were operational.

The contractors for the remaining four clusters had abandoned their contracts midway. The mining operation had also remained closed during monsoon. Moreover, only limited mining operations have resumed in the above mentioned three clusters as environmental clearance for various quarries has not come by.

“We are trying to restart mining in Moga and Fazilka clusters with our own machines. The authorities dealing with the Environmental Impact Assessment have been asked to give speedy clearance for operations at mines. A survey of possible mining sites in each district and post-monsoon data is also being compiled. Once this is done, we will have more mines available for extracting sand and gravel,” said a top officer of the Mining Department.