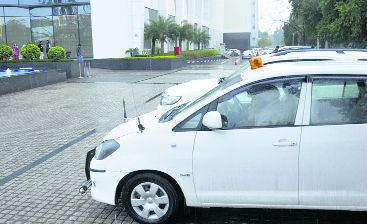 Already facing a financial crunch, the Punjab Government has decided that divisional commissioners, deputy commissioners and SSP-ranked officers will henceforth not be provided Innova MUVs and instead get vehicles with an upper ceiling of Rs 12 lakh.

Further, the Transport Department has decided to enhance the Chief Minister’s security fleet from existing 113 to 169 vehicles. The Jails Department will get 36 additional vehicles.

As per information gathered by The Tribune, divisional and deputy commissioners, and SSPs are entitled to Innova Crysta. However, following a meeting held under the Chief Secretary on November 3, all officials and departments have been divided into two groups.

As per the new rules, DIGs, police commissioners, IGs, ADGPs, head of departments and above fall in group 2, while the remaining officers come under group 1.

A senior Transport Department officer claimed SDM and ADC-level officers along with SP-ranked officials would now get a Mahindra Bolero, while SSP-ranked officers will have to shift down to a Mahindra Marazzo, which falls in the under-Rs 12 lakh category.

“For the time being, Innovas in many districts are good to run for another three to four years. Thereafter, all will have to abide by the new rules,” he stated.

“We have to often travel to Delhi or attend meetings in Chandigarh. A majority of us will now have to use personal vehicles for long tours. Innova was our basic requirement owing it its comfort,” said a senior IPS officer.

During the meeting, it was stressed that instead of buying vehicles, hiring cars could be a viable option to avoid unnecessary financial burden on the state.

The government will add 56 new vehicles to the existing fleet of 113 in CM’s security, taking the total to 169. There will now be 20 bulletproof cars, instead of 14; 29 regular cars, up from 25; 18 new Scorpio; four Bolero; 11 Bolero camper; two new bulletproof Gypsy; a bike; an ambulance and a bus

After a long wait, the Jails Department, which only had five prison vans and 14 Gypsy, will get 36 new vehicles. The government has sanctioned three 32-seater buses, two 16-seater minibuses, 16 Gypsy or Mahindra Bolero and 15 prison vans