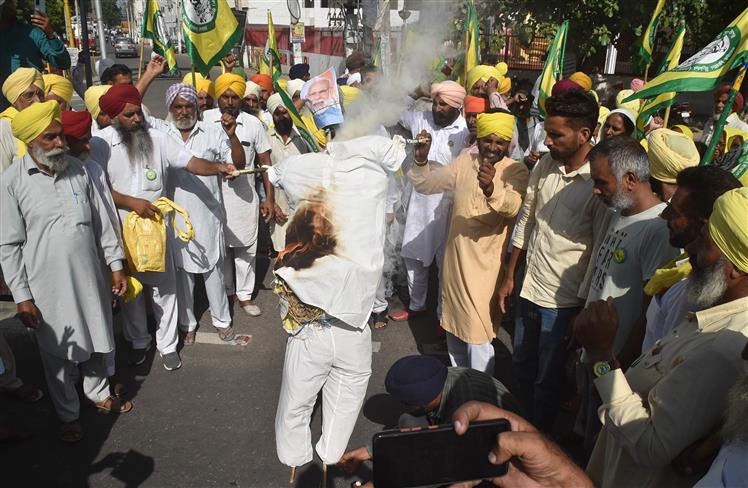 Members of the BKU (Ekta-Ugrahan) burn an effigy of the Central Government in Bathinda on Monday. Tribune photo: Pawan Sharma

Scores of farmers under the banner of the BKU (Ekta-Ugrahan) on a call given by SKM staged a protest outside the district administrative complex in Bathinda and Mansa districts and burnt effigy of the Central Government on Monday.

Farmers have been protesting against the delay in taking “strict” action against the culprits of the Lakhimpur Kheri incident and non-fulfillment of their long-standing demands. They raised slogans against the Union government, demanding justice in the matter. They also observed two-minute silence to pay tribute to those who died in the incident.

Shingara Singh Mann, state general secretary of BKU (Ekta-Ugrahan), said, “On October 3, 2021, farmers protesting peacefully in Lakhimpur Kheri were mowed down by vehicles and four farmers and one scribe died in the incident while many others sustained injuries. Protests erupted in the entire nation, but the Union government as well as the UP Government have failed to provide justice in the matter till now.”

Karamjit Kaur, a farmer leader, said, “Even as a strong case was made out against those responsible for the heinous crime, the accused are still roaming freely. The culprits who perpetrated the crime must be arrested and strict punitive action be taken against them.”